The other names of the parable of the prodigal son 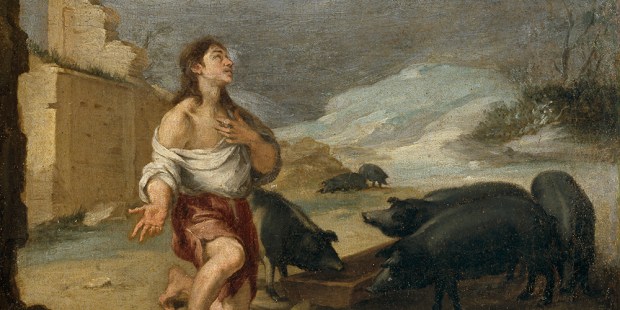 Plus: What does “prodigal” even mean?

The parable of the prodigal son might be one of the most (if not the most!) popular in all four Gospels. But the other names by which this parable is known might not be as familiar.

For instance, some refer to it as “the parable of the two sons.” In fact, Jesus’ audience would immediately recognize the opening words of the parable as we find them in Luke (15:11-32) —“There was a man who had two sons” — as belonging to a very specific tradition, the very same one the stories of Cain and Abel, Ishmael and Isaac, and Esau and Jacob belong to. And they would also be familiar with the pattern we find in all three: the younger brother is always the righteous one —Cain being a murderer, Ishmael being denied his inheritance by Sarah (Cf. Gen 21:10-12), and Esau willing to give up on his birthright for a bowl of lentil stew. However, as is often the case in Jesus’ speeches, there is an original twist in this one: here, the younger son is not the righteous Abel, the obedient Isaac, or the clever Jacob. Junior is here, instead, a “prodigal” son. Those listening to the parable, or reading it for the first time, surely might have not seen that one coming, as it implies an inversion of these classic biblical narratives.

Some others refer to this parable as “the parable of the loving (or the lovesick) father,” for obvious reasons. The parable makes it clear the father was hopefully and actively waiting for his son to return —“while he (the son) was still far off, his father saw him.” In fact, he wouldn’t even allow his son to finish his rehearsed repentance speech, immediately calling for his servants to dress him with a fine robe and sandals, put a ring in his hand, and slaughter the fattened calf to celebrate his son’s return with a feast. However, there is another gesture that makes this fatherly love even more evident. It is not that this father loved his son because he came back. He loved him even before he missed him, when they were still living under the same roof, to the point of granting him what he wanted: his share of the inheritance. But here, some complications arise.

Some commentators have argued that by asking his father for his share of his inheritance, this younger son sinned against the fourth commandment, “Honor your father and mother.” According to these commentators, by so doing, the son would have treated his father as if he were dead already. Some other commentators explain that, on the other hand, when the “prodigal” son asked for his inheritance in advance he was not necessarily wishing his father dead at all. In fact, asking for one’s share of an inheritance in advance is not unusual (nor was it then either) and certainly not necessarily a sin — more like a possible lack of wisdom, instead.

But the fact that his father doesn’t rebuke him but rather agrees to his request is rather telling. It may be the case the father knew there was no way to change his younger son’s mind: no matter what, he was already determined to leave home although he was clearly not yet ready to live on his own. The father knew beforehand the lack of wisdom of this younger son would eventually reflect negatively on him; so by failing to discipline him and by acquiescing to his dishonorable request, the father was eventually to be seen as complicit in the son’s debauchery. What this gesture suggests is that he was willing to share his son’s guilt and shame, even if that would imply tainting his own name.

However, the parable is surely best known as “the parable of the prodigal son.” But what does the word “prodigal” mean? Prodigality is usually understood as excessive, luxurious, wasteful, extravagant spending. The Greek phrasing often used to refer to this “prodigal son” is asotos yios, but Luke only says this son “squandered his estate with loose (asotos) living. (In the Latin, this asotos is translated as dissipavit, “dissipated” or “loose”).

Some translations claim this asotos should be translated as “unsalvageable” or “lost,” indicating the son is allegedly beyond redemption, from the root soter commonly used to designate a savior, often used as a title for Jesus himself. However, this translation is somehow problematic, and needs to be contrasted with how the word asotia is used in other texts: in Paul’s letter to the Ephesians, as in his letter to Titus, and in Peter’s first letter, asotia only refers to dissipation as being somehow equivalent to drunkenness (“do not get drunk with wine, for that is dissipation, but be filled with the Spirit,” as we read in Ephesians). In that sense, it would be safe to say the “prodigality” the parable ascribes to this younger son does not refer to his being “beyond salvation,” but rather to his spending his inheritance loosely in wine and partying.