The Notre Dame fire burns a hole in our hearts, yet cannot consume our faith 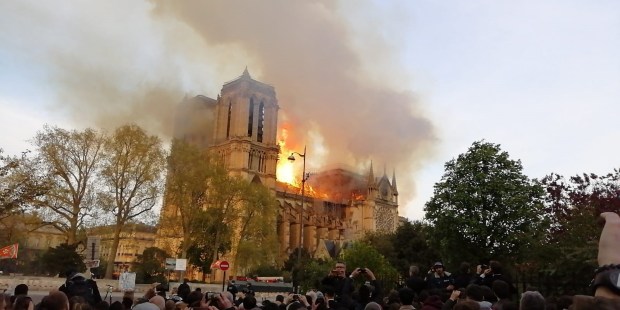 Disbelief and shock are uniting Catholics and the French nation.

PARIS — There are very few words to sum up the emotions of Catholics and non-Catholics alike as we watch the fire sweeping through the rooftops of Notre Dame. Crowds gather in silence to stare in disbelief, in prayer, and perhaps with a glimmer of hope that the firefighters can get control of the fire before it destroys one of France’s greatest treasures any further.

The cathedral that stands so prominently along the banks of the River Seine is not only the symbol of Paris but a refuge for its citizens, offering Masses and support through major events, including the terrorist attacks in 2015. And now as we see its famous spire falling, there are tears in the eyes of many of those gathered — regardless of their faith.

The shock of the blaze runs so deep perhaps because we’ve taken this imposing cathedral for granted for so long. An 856-year-old monument is collapsing before our eyes, incredibly at a time that major restoration work had only just started. A solid structure that seemed to replicate the strength of the many French Catholics, a cathedral that survived bombings, floods, and terrorist plots over centuries has now succumbed to a fire, which may have started accidentally due to the present renovation project.

The cathedral was originally built on the site of a Romanesque church, on the orders of the Bishop of Paris, Maurice Sully, to reflect King Louis VII’s desire to show Paris as the political, economical and cultural heart of France. It was completed in 1345. The finished building showed nearly 200 years’ worth of devotion and attention to detail, yet still it underwent modifications over the following centuries to reflect political and religious sentiments of the time. Certain parts of the cathedral were altered for practical reasons — such as the 12th- and 13th-century stained-glass windows that were replaced to let in more light, while the original spire had to be taken down due to wind damage.

Notre Dame not only underwent physical changes — during the French Revolution in 1793 the cathedral was desecrated and turned into a Temple of Reason followed by the Cult of the Supreme Being, with many of its historical artifacts and treasures destroyed or plundered. The statue of the Virgin Mary was even replaced by the Goddess of Liberty on several altars for a period of time. Eventually, during the rule of Napoleon Bonaparte, the cathedral was returned to the Catholic Church in 1802.

Although the cathedral was in use the 19th century, it was heavily damaged. In 1844, thanks in part to the popular work The Hunchback of Notre Dame by Victor Hugo, the cathedral was in the spotlight and King Louis Philippe ordered its restoration, including the addition of a new spire, higher and more elaborate than the original. That same spire fell just before 8 p.m. this evening.

Emotions are running particularly high this evening, as many remember the cathedral’s ability to unite thousands in moments of celebration and grief — the cathedral notably held a special Mass on August 26, 1944, attended by General Charles de Gaulle and General Philippe Leclerc, to celebrate France’s liberation from the Germans in World War II. It is too unreal to witness such a monument steeped in history, faith, and culture up in flames. This feeling is echoed in the tweet of the French president Emmanuel Macron, roughly translated as:

“Notre Dame is up in flames. The emotion of an entire nation. Thoughts to all Catholics and to all French citizens. Like all our compatriots I am sad to see a part of us burn this evening.”

While Mgr. Olivier Ribadeau Dumas, the spokesman for the Conference of Bishops, described the cathedral as an emblem for the country, the Notre-Dame offers comfort to so many worldwide, with 50,000 pilgrims visiting the site each day. Many Catholics will be anxious to know the whereabouts of some of our Church’s most precious relics: fragments of the True Cross of Jesus Christ and the Crown of Thorns that have been kept in the cathedral since King Louis IX brought them to France from the Byzantine Empire in 1238.

Thankfully as the crowds were evacuated from the cathedral, the treasures were taken to safety, according to Father Frederic, who’s been a priest at Notre Dame for two years, hopefully to be reunited with the cathedral very soon.

As this fire burns a little hole in our hearts, we must look to the history of the cathedral once more. We know we can restore the impressive edifice to its truly former glory thanks to the dedication of a united people. And just think of the power of this symbolic building — how incredible it is that a cathedral on fire can bring millions together in sorrow in a country famous for its secular stance.

Finally, as the sun goes down and the fire loses its grip, let’s not forget, as we make our way toward Easter Sunday, that we are blessed to enter a period of such hope and joy. We have an opportunity to come together to continue to build our faith and our beloved cathedral once more.