The Notre Dame fire: what was saved and what was lost

Of the 13th-century stained glass windows that were saved, the cathedral's spokesman said, "It’s a bit of a miracle, we are very relieved.”

“A scene from a bombing” is how it was described by Philippe Marsset, vicar general of the archdiocese of Paris. He was one of the first to enter the cathedral after the fire. The entire oak structure sustaining the roof, known as “the forest” because of its large number of beams—which dated back to the 19th century on one side and the 13th on the other—went up in smoke in just a few hours. The vaulted ceiling of the building is now pierced in three places by gaping holes, above the choir and the nave, revealing the sky.

However, amidst the chaos, the cross suspended above the altar remains intact, “painful and luminous at the same time,” in the words of Fr. Grosjean, a priest of the diocese of Versailles.

The tunic of St. Louis and the Crown of Thorns were saved, said Bishop Patrick Chauvet, rector of the cathedral, on Monday evening. Two other relics kept at Notre Dame, a piece of the Cross and a nail from the Passion, also escaped the flames, thanks to the work of the firefighters. “All the works of art that were in the ‘Treasury’ section were saved,” said Lieutenant Colonel Gabriel Plus, spokesman for the Paris Fire Department, on Tuesday morning, after having fought the fire for more than 10 hours.

Relics at Notre Dame, including the Crown of Thorns, have been taken to a safe place, Paris mayor confirms https://t.co/A2H5Y6Jp89pic.twitter.com/mTzGpsonTV

It was believed to have melted away, taking its treasures with it, but the rooster-shaped reliquary that topped the spire of the cathedral was found intact on Tuesday—damaged, but whole, according to Bishop Patrick Chauvet. The three relics that were miraculously saved within it are a piece of the Holy Crown of Thorns and relics of St. Denis and St. Genevieve, patrons of Paris.

The rooster that was standing on top of Notre-Dame has been found ! https://t.co/b7lrvtAEcj

The two statues of the Virgin—the one called “Virgin of the Threshold,” and the “Pieta” in the back of the choir—are intact. The sculpture group on the high altar, depicting The Descent from the Cross and the Entombment, as well as kings Louis XIII and Louis XIV kneeling, also seems to be spared.

As for the statue of the Virgin before which Paul Claudel experienced his conversion, it was thoroughly dowsed by the jets of water, but is still standing on its pedestal.

The 16 copper statues adorning the spire of Notre-Dame de Paris, representing the 12 apostles and four evangelists, have escaped the flames by chance. They were removed last Thursday for restoration.

No official list has yet been released. While on Monday evening the commander of the Firefighters Brigade of Paris, General Jean-Claude Gallet, told reporters that the most valuable works have been saved and stored at the Hotel de Ville, Bishop Patrick Chauvet lamented the fact that “removing large paintings is impossible.” Thus, 13 large paintings called The Mays of the Goldsmiths, offered as a tribute to the Virgin Mary by the Brotherhood of Goldsmiths from 1630 to 1707, could not be removed from their places. The Minister of Culture, Franck Riester, said Tuesday morning, “The large paintings, a priori, have water damage.” And Maxime Cumunel, Secretary General of the Observatory of Religious Heritage, specified that “there are four very large ones, including a Laurent de La Hyre, which a priori are destroyed.” The paintings will probably be removed on Friday and transported to storage facilities at the Louvre, where they will be dehumidified and restored, according to the Minister of Culture. Among the works saved are “The Virgin of Piety” painted by Lubin Baugin, a “Madonna with Child,” and “The Black Virgin of Czestochowa” inaugurated in the Saint-Germain chapel in December of 2018.

Notre Dame of Paris houses three organs, including a remarkable instrument built starting in the 15th century and then improved by the famous organ maker Aristide Cavaillé-Coll. It is composed of nearly 8,000 pipes. These, made of a tin-lead alloy, do not withstand heat very well, but they’ve miraculously survived the fire. “It’s a real miracle that the water didn’t penetrated inside,” said Olivier Latry, titular organist of the great organ. Indeed, the whole structure, including the pipes and the consoles, was very little affected. Located under the north rose window, which was abundantly sprayed with water to protect its lead structure, the instrument was protected by the large stone bridges above it. It’s not known at this stage if soot and dust have entered the pipes and bellows.

As for the choir organ, dating from the early 19th century, while its structure is also intact, it has suffered enormously from the large quantities of water that were sprayed to extinguish the fire.

While the possibility that the lead that holds together the three rose windows of Notre Dame, representing the flowers of paradise, could have melted in the heat of the fire, it seems that only the stained glass windows dating from the 19th century were affected. “These are stained glass windows of the 19th century, much less important that may have been touched, but not the jewels of the 13th century, it’s a bit of a miracle, we are very relieved,” said the spokesman of the cathedral, André Finot. Bishop Patrick Chauvet slightly qualified these remarks by explaining that one rose window should probably be dismantled to prevent it from falling, after moving during the disaster.

The rose window has survived. #NotreDamepic.twitter.com/zvZznKhxhN 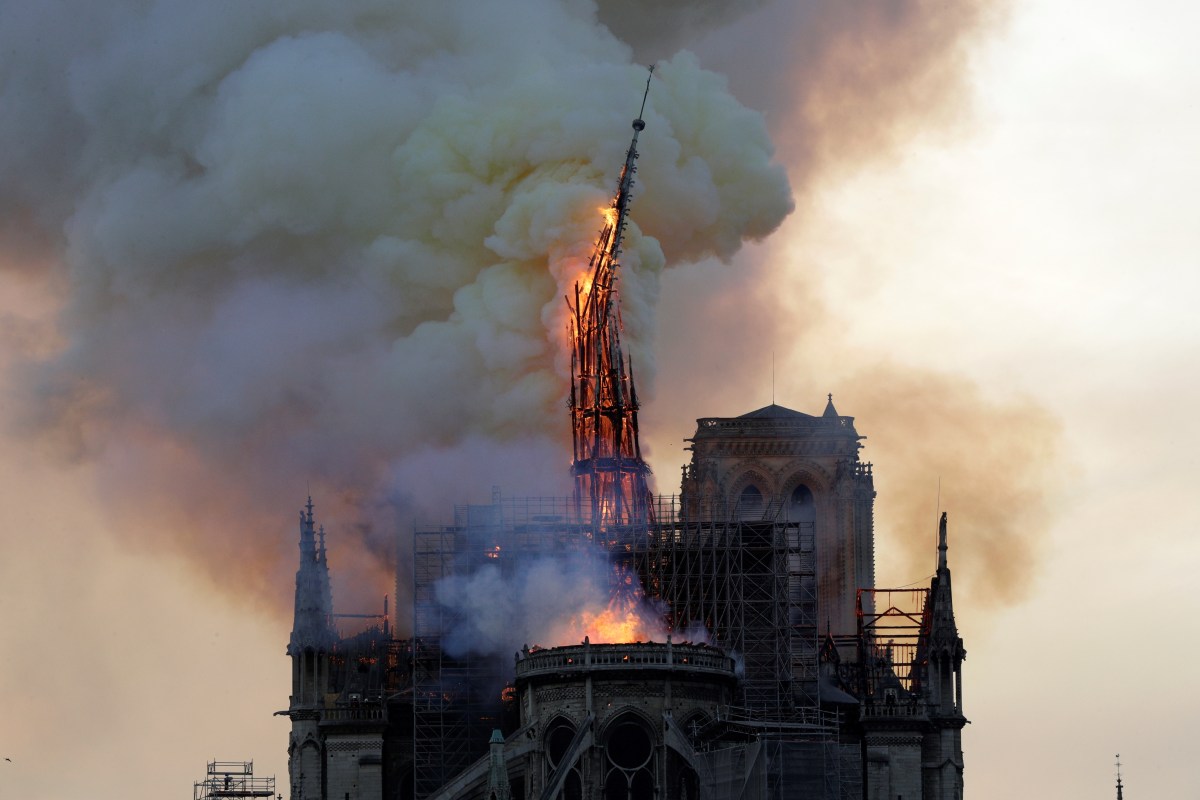