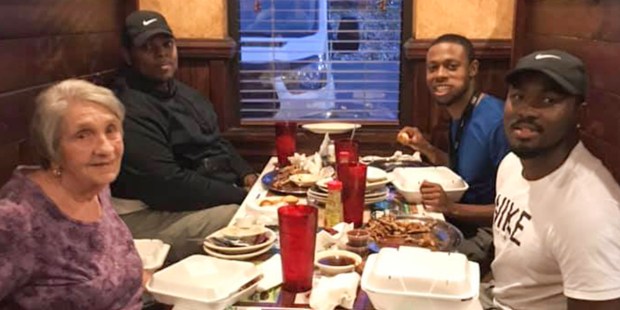 This touching story of three men who reached out in kindness has gone viral.

Eating alone in a restaurant can be a time of quiet relaxation for some people, but for others it can be a painfully lonely experience. This was the case for an elderly woman that Jamario Howard from Alabama spotted, who was dining alone. Seeing her there made him think I’d hate to have to eat alone.

Howard, who posted about the occasion on Facebook, was out with a couple of friends at Brad’s Bar-B-Que when he decided to go up to the elderly woman and chat with her. He discovered that her husband had died and that their 60th wedding anniversary would have been the following day.

Moved by the lady’s story, Howard offered his condolences and asked the woman to join his table so that they could all eat together. The woman happily accepted the invitation and spent her meal chatting with the group of three men.

The beauty of the story, which has garnered over 214,000 likes, is perhaps a lesson we can learn described in Howard’s own words:

“The point in this is always be kind and be nice to people. You never know what they are going through. This woman changed my outlook on life and how I look at other people. Everyone has a story so do not judge! And people i can’t stress this enough. GO SEE YOUR MOM AND YOUR GRANDPARENTS. They miss you!!”