The hallowed graves of D-Day’s dead: Honoring friend and foe

Military cemeteries have been a source of healing in Europe since the First World War.

Along with numerous dramatic activities commemorating the 75th anniversary of D-Day, there is a museum-type exhibition in Portsmouth. Guests such as President Trump and Queen Elizabeth will definitely see Air Force flyovers but not the more reflective display by the Commonwealth War Graves Commission.

The CWGC is one of a number of organizations that have been quietly working for more than a century to bring dignity to the aftermath of war. The American Battle Monuments Commission is another seasoned practitioner, ensuring the upkeep of American service personnel’s graves. 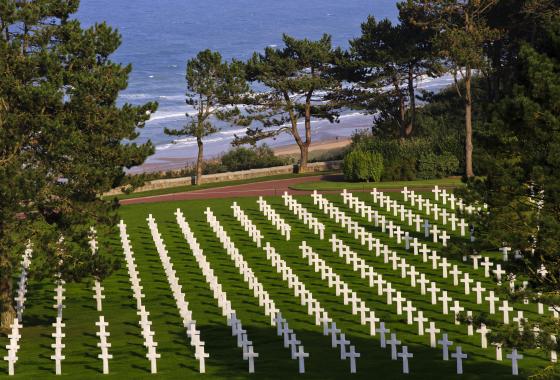 France is the final resting place for millions of soldiers from the Commonwealth, USA, Germany, France and beyond. Most of these graves are from the First World War and are located in the northeast of France. For the Second World War, the location with the highest body count was Normandy, in the northwest.

Nobody knows the exact number who died during D-Day and the weeks that followed. There are very precise records of how many are buried, though. Military cemeteries are one of the few aspects of warfare conducted with enormous care, compassion and efficiency. They are also among the most striking reminders of the consequences of war. If ever there was a monument to mankind’s interconnectedness and mortality, it would have to be the war cemeteries of France, and they are as well-ordered and welcoming as ever.

The Normandy cemeteries are places where religious affiliations are respected without being segregated. Where segregation does exist, it is on the basis of nationality and not race or creed. Some cemeteries are for the nationals of one country, while others are for everyone who died in that vicinity, including combat enemies. Within any cemetery there are grave markers that show the religious diversity of the time. Jewish and Muslim headstones stand next to those of their Christian comrades. In cases where religious affiliations were unknown, the deceased were usually assumed to be Christian. The French are the only cemetery keepers to have a fourth category: atheists and “free thinkers.” Their grave markers feature no religious symbols.

Military cemeteries have been a source of healing in Europe since the First World War. Even the appalling bitterness after that conflict did not prevent graves being created for foreign invaders. Normandy has some of the most magnificent examples, with the dead of the German occupiers being given more respect than might be expected.

Not all of those who died in Operation Overlord, from June 6 to August 30, 1944, are buried in Normandy. There were more than 425,000 casualties from both sides, a quarter of whom were American. Many bodies have never been found, and some have been repatriated, but most are still interred in the rich soil of Normandy.

The largest of the Allied cemeteries is the Normandy American Cemetery and Memorial. Its 9,388 graves attract more than a million visitors a year. Few who see it are prepared for the profusion of gleaming white crosses, and occasional other symbols, that commemorate the Americans who died on nearby Omaha Beach.

With 21,160 burials, the German military cemetery of La Cambe is twice the size and 10 times as somber. It doesn’t attract anything like the number of visitors that the Allied cemeteries do. The atmosphere of defeat couldn’t be more different from the light and hopeful vigor of the Normandy American Cemetery. The crosses are dark, in roughly hewn stones that stand in small clusters. Some of the occupants were war criminals who never made it back to Germany to stand trial after the war. It’s reassuring that a forgiving younger generation of international school children still tend to this cemetery ever year, as they do with the Allied graves. As the sign outside says, this is “a graveyard for soldiers not all of whom had chosen either the cause or the fight. They too have found rest in our soil of France.”

There are distinct national characteristics to the cemeteries. While the American and French authorities have been using crosses since the First World War, the Commonwealth nations use flat, rectangular headstones instead. They usually have crosses incised into them, and there are large memorial crosses as well. The families of the deceased, when known, would have been asked for their preferences of religious content.

What we hear very little about is the process of the cemeteries’ early burials. This was not as serene an activity as the spotless locations would suggest today. At first the gravediggers tended to be local Frenchmen, usually old or disabled, who worked for the money that the Allies had brought with them. German prisoners of war were also used, without payment.

The organizers of the cemeteries are among the least-hymned heroes of the war. For the Americans, the Quartermaster Graves Registration Service didn’t just arrange for holes to be dug; taking weapons and other US-government material from corpses was part of their job. In most cases an army chaplain conducted an ecumenical service for all the deceased. Catholic Last Rites were not usually an option, although there were many priests such as Fr. Francis Sampson who went far beyond the call of duty. In one of the rare examples of transnational brotherhood in the weeks after D-Day, he was saved from execution by a German firing squad. The Catholic commanding officer spared Fr. Sampson’s life when he realized this was a priest trying to prevent the German soldiers from shedding real combatant blood.

The last word on inner conflict should go to one of the men who did most to honor the war dead with seemly cemeteries. The British poet Rudyard Kipling has a reputation for being an unrepentant imperialist, despite the death of his only son in the First World War changing him to some extent. The grave of the 18-year-old John Kipling is consistent with his comrades’ in its simplicity. As Kipling Senior had lied to get his highly myopic son into the army, the words of one of his war poems are especially revealing:

“If any question why we died,
Tell them, because our fathers lied.”