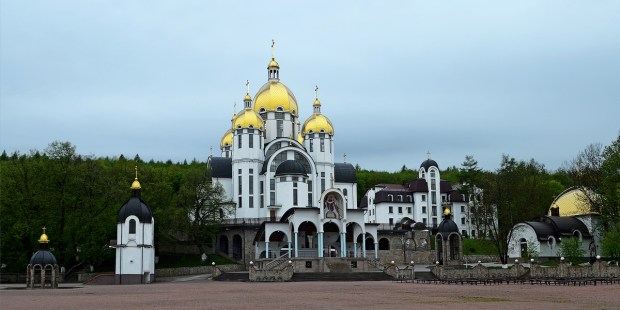 Since the 13th-century apparition of the Blessed Virgin Mary, people have maintained the faith in Zarvanytsia.

For a pilgrimage site known as the “Place of Disruption,” the Zarvanytsia shrine in western Ukraine has lived up to its name over the centuries. From the interrupted sleep in which the Virgin Mary appeared to a monk—an event that gave the place its name—to the Soviet attempt to eradicate Catholic faith and practice, Zarvanytsia has seen much disruption.

The Church of the Mother of God at Zarvanytsia, which was built in 2000, will be made a minor basilica on June 30, a testament to the one thing that has remained uninterrupted—the faith that has guided Ukrainians for over 1,000 years. A papal representative will visit the sprawling grounds of Zarvanytsia at the end of this month to make the designation official.

The shrine is in the Terebovlia region of the Ternopil Oblast, or state, about a three-hour drive to the southeast of Lviv, through fields of dark earth that have given Ukraine the nickname “the breadbasket of Europe.”

Pope John Paul II did not make it to Zarvanytsia when he visited Ukraine in 2001, but he did request that the miraculous icon from there be brought to him during his visit to the capital, Kyiv.

It was from that capital that a monk fled in the year 1240, as the invading Mongols destroyed the city. Wounded and exhausted from the journey of some 500 kilometers, the unnamed monk found a spring near the Strypa River and stopped to refresh himself. He lay down to rest, but the Blessed Virgin Mary appeared to him in a dream. Disrupted from sleep, he found an icon of Mary and the Christ Child in her arms. The monk washed himself with the water from the spring and noticed his wounds were healed. Filled with gratitude, he built a chapel in which he prayed before the icon.

Soon, a town was established, and word got out about the miraculous spring. Since then, many pilgrims have been healed after prayer before the image and the consumption of the water from the well.

According to Ukrainian Greek Catholic Church: First steps. Confession of Faith. Revival, Turks and Tatars burned down a monastery here in the 17th century. The icon survived and was moved to a new wooden church built in the center of the village.

In 1754, that church burned down, and that same year, the Church of the Holy Trinity was built nearby, and icon was enshrined there.

A Studite monastery was established here in 1922. Its first hegumen, or abbot, was Fr. Klementiy Sheptystsky, the brother of the long-time leader of the Ukrainian Greek Catholic Church, Metropolitan Andriy Sheptytsky, who died in 1944.

In that same year, when Ukraine became part of the Soviet Union, the monastery’s wooden church was burned down. The monastery itself was destroyed two years later, as was a chapel in 1961. The Ukrainian Greek Catholic Church became illegal in 1946, but the monastery continued to function underground.

During the Soviet era, authorities blocked roads leading to Zarvanytsia on major holy days, to prevent pilgrims coming to the shrine. The miraculous spring was wrapped in barbed wire.

“The KGB would pour diesel into the well,” Fr. Andriy Shalai, a former military chaplain, said while giving this reporter a tour in early May.

But local residents hid the icon (as did the monks) and held secret Divine Liturgies in their houses or in the forest. In 1975, Fr. Vasyl Semeniuk (who is now Metropolitan of the Ternopil-Zboriv Archeparchy) was appointed as the priest responsible for this area. He was also the head of the underground seminary here.

“And then he went to visit Lourdes for the first time and said ‘I have to build something here like that,'” Fr. Shalai said.

Indeed, Zarvanytsia has been dubbed the “Lourdes of Ukraine.”

In 1988, when the Ukrainian Greek Catholic Church emerged from the underground, local residents presented the long-hidden icon to the Church of the Holy Trinity. The following year, Fr. Semeniuk and other priests celebrated Divine Liturgy openly in the local church for the first time in 50 years. The chapel near the spring was rebuilt and the destroyed church renovated. A large chapel was erected where liturgy is served for large pilgrimages. A pilgrim center was revived, and a hostel for pilgrims, an outdoor concert stage and a large building for retreats were built. The Studite monastery building was reconstructed, as well as the monastic church.

Before he became Major Archbishop of the Ukrainian Greek Catholic Church, Cardinal Lubomyr Husar consecrated the Church of the Mother of God in 2000. His successor, Major Archbishop Sviatoslav Shevchuk last August dedicated a Holy Land complex, with copies of the Holy Sepulcher, Golgotha, the Garden of Olives, the Holy Stairs, and the Tower of David.

Said Archbishop Shevchuk on that occasion, “This is the place that the Lord Himself chose through His Immaculate Mother as the meeting place with the Ukrainian people.”