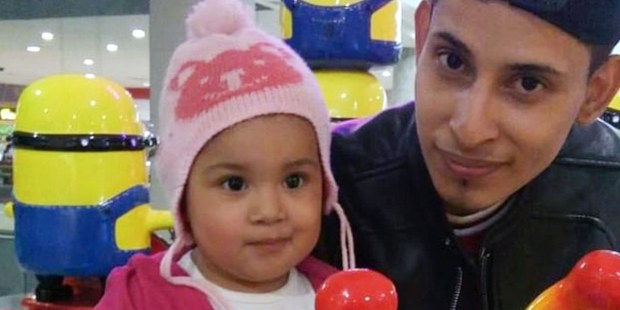 Photos of father and toddler in river send shock waves as far as Rome.

The Salvadoran family that lost its father and two-year-old daughter in the Rio Grande Sunday reportedly was fleeing poverty in the Central American country. They had secured a humanitarian visa in Mexico, but after spending two months in a migrant camp waiting to apply for asylum in the U.S., Oscar Martínez decided that they should try to cross the border from Matamoros to Brownsville, Texas, on Sunday, according to Mexican newspaper La Jornada.

In an interview with La Jornada, Martinez’s wife, Tania, said Martinez first crossed with his daughter, Angie Valeria, and left her along the bank while returning back to help his wife cross. Apparently, Valeria was frightened and jumped into the river.

Rushing to save the toddler, Martinez and his daughter were instead dragged by the current, the paper repoted. Tania was rescued by a person nearby, she told La Jornada.

Twelve hours later, on Monday morning, firefighters from Matamoros found the two bodies, about 550 yards from where they tried to cross. Both were face down, with Valeria’s arm clutching her father’s neck.

On Twitter on Wednesday, Matamoros Bishop Eugenio Andrés Lira Rugarcía said that the diocese, which covers the territory where the drowning occurred, is “very sorry for the death of the migrants who have lost their lives looking for a better future. We ask God for [their] eternal rest, and we ask him to give us all strength to reach out to those who have had to leave their land.”

“They lost their lives in their attempt to cross into the United States and seek the famous American dream,” said Fr. Francisco Gallardo, director of the Commission for Migrant Ministry for the Diocese of Matamoros, in a statement obtained by Aleteia. The diocese “has been close and has been accompanying the widow, above all in the legal proceedings that she now has to confront,” Fr. Gallardo said.

The tragedy “brings a caution for all of our brother migrants in their attempt to cross into the United States,” the statement continued. “It’s a reality that happens frequently.”

It was a relatively narrow section of the river where the family tried to cross. But Fr. Gallardo noted that there has been an abundance of rain lately and that the river is likely coursing faster.

The priest expressed his hope that the event “might help us and move us toward ’life’ and we turn again to look at the migrant as someone who needs every attention, in an integral way.”

At the Vatican on Wednesday, spokesman Alessandro Gisotti said that Pope Francies, “with immense sadness” saw the images of the father and toddler. “The Pope is profoundly saddened by their death, and is praying for them and for all migrants who have lost their lives while seeking to flee war and misery,” he added.

The U.S. Conference of Catholic Bishops in a statement Wednesday referred to the incident as an “unspeakable consequence of a failed immigration system.”

“This image cries to heaven for justice. This image silences politics,” said Cardinal Daniel N. DiNardo, President of the United States Conference of Catholic Bishops, and Bishop Joe S. Vásquez of Austin, Chairman of the USCCB Committee on Migration, in a joint statement. “Who can look on this picture and not see the results of the failures of all of us to find a humane and just solution to the immigration crisis? Sadly, this picture shows the daily plight of our brothers and sisters.

Vatican News reported that dozens of people have died this year attempting to cross the Rio Grande. On Sunday, two infants, a toddler, and a woman were found dead from heat exhaustion in Anzalduas Park, in the southern Texas city of Mission.

“Not only does their cry reach heaven. It reaches us,” the U.S. bishops’ statement continued. “And it must now reach our federal government. All people, regardless of their country of origin or legal status, are made in the image of God and should be treated with dignity and respect. Recent reports of overcrowded and unsanitary conditions are appalling and unacceptable for any person in U.S. custody, but particularly for children, who are uniquely vulnerable. Such conditions cannot be used as tools of deterrence. We can and must remain a country that provides refuge for children and families fleeing violence, persecution, and acute poverty.

“Congress has a duty to provide additional funding to address the needs of children in federal custody,” the bishops continued. “Their supplemental appropriations bill should also increase protections for immigrant children, including heightened standards and oversight for border facilities. It is possible and necessary to care for the safety of migrant children and the security of our citizens. By putting aside partisan interests, a nation as great as ours is able to do both.”