How a little imagination can strengthen your child’s faith 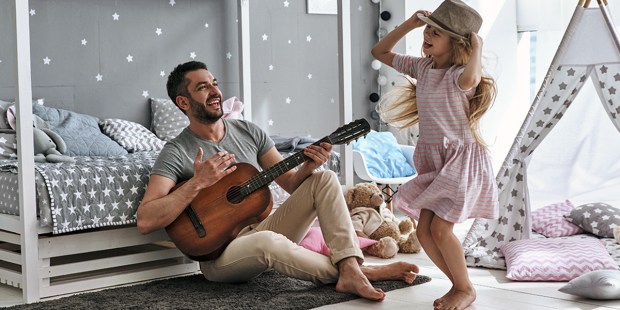 Like many kids, I took my parents for granted when I was growing up. They married young and started a family after a profound conversion to Christianity. Nightly prayer time in our home was a big deal, but I thought that was normal. I thought all families had two-hour long Bible story pageants at bedtime where dad played his guitar and invented songs and assigned the roles of David and Goliath and Queen Esther; where pajama-clad kids jumped from bed to bed, reliving the hallmark tales of our Faith.

“He’s upset – play him a song on your harp,” my dad encouraged me one night. My brother Jesse was King Saul, so I must have been David. I remember my mom peeking in the room with a smile. Lots of times, these “bedtime” stories wound us up, but she never protested. It was as if she sensed something really special was going on – because it was.

Fast forward 30 years. Now I’m the mom, and I recently noticed that all too often my bedtime stories sound like this: “There was a boy named Gary and he went to the park and I love him. The End. Go to sleep!”

Try as I may, I simply don’t have the energy for musical theater at bedtime. So instead, I’ve been attempting to carry on my dad’s imaginative spirit at other times throughout the day.

Morning prayer time immediately became more meaningful when I challenged my kids to close their eyes and imagine their faith as St. Faustina’s spiritual director Blessed Michael Sopocko did: “Trust, then,” he said, “may be compared with a chain hanging from Heaven and to which we attach our souls.”

So we twisted up a sheet and hung it from the second floor banister. Sure, this swinging prayer time started to look a little dangerous, but not before my 13-year-old nephew exclaimed, “I never thought about God like this before!”

His encouragement led me to the next day’s exercise, which was to follow Brother Lawrence’s example and “place ourselves in the presence of God.”

I told them to imagine God as a ray of light peeking out from behind a cloud – “now stand in that light.” Again, I was met with rapt attention. So I did a little research, and as it turns out this concept of imagination feeding one’s prayer life is nothing new. St. Ignatius, for example, was an expert on the subject:

Imaginative prayer is recognized as one of the hallmarks of Ignatian spirituality. Ignatius first grasped the importance of the imagination during his long convalescence from his battle injuries. His key insights about God came through his imagination. The notes he took as he read about the life of Christ filled a 300-page notebook that he treasured for the rest of his life. The lives of the saints inspired him with noble thoughts of what he might do with his life. He told himself “St. Dominic did this, therefore I must do it. St. Francis did this, therefore I must do it.”

The above passage helped me finalize my plans for our summer book list. Our first read-a-loud about St. Damien the Leper was a huge hit.

We’ve moved onto this one about St. George slaying the dragon. I open it when we need a break from the afternoon heat. We shut the shades, and my little boys jump from couch to couch, swinging foam swords. My teens and I take turns reading aloud.

The other day, I caught the wonder in my 6-year-old Ezra’s eyes as he donned a cape and tumbled through the living room. And for just a moment, I too glimpsed the enormous dragon, sunk down deep in a swampy bog, swinging its tail, surrounded by mist …

Read more:
An overlooked secret in the spiritual life: This author says it’s your imagination