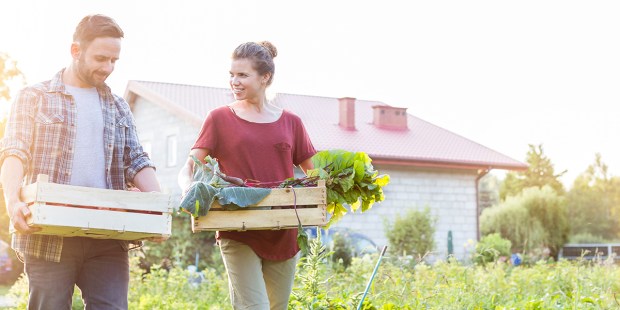 I thought my husband’s desire to try farming was crazy… until we tried it.

“I want to farm.” My husband surprised me one day last year with that simple statement. He has lived in a city or suburb his whole life, as have I, so I was pretty surprised that farming was something he was interested in. On top of that, I didn’t think farming was a reality for people who had no experience with it. Don’t you have to be born into a farming family to be able to farm?

My very supportive response to him was, “That sounds kind of crazy. Why do you want to farm?!” He tried to explain, and I listened, but I remained pretty closed off to the idea. In the coming months, he did more research on farming and first-time farmers, and we kept talking about it on and off. I started to understand more about where he was coming from, and tried to imagine a world in which we were happily living on a farm.

Honestly, it was hard to imagine because I just saw all the roadblocks and difficulties … What if all the animals died because we don’t know what we’re doing? What if nothing grows? How could we make any money if equipment and and everything involved is so expensive? … while he saw all the benefits and joys — getting to work with our hands, spending a lot of time outside, being more in touch with nature, and having a healthier and more beautiful environment to raise our son.

So when we found an opportunity to work on a farm for some time this summer, we jumped at the chance. We would get to experience farm life without having to commit to and invest in the lifestyle — a great compromise. So for the month of June, we lived on an organic dairy farm in Wisconsin.

And it was awesome.

The farmers were incredible. They were more than generous, down-to-earth, and endlessly patient people. We spent our days taking care of the chickens and gathering eggs, helping with the cows, mowing, and making and packaging butter. Not only did we learn a lot of specific farming knowledge, we learned about the lifestyle of farming; what it would be like to farm for a living.

I’ll give you some examples of our newfound knowledge: the natural color of butter is bright yellow. I kid you not. When you beat cream, you know it’s ready when you see the sunflower colored specks of butter form. Now grocery store sticks of butter look pale and unhealthy to me, but it was a bit of a shock to make that switch in my mind.

We also learned what kind of qualities are necessary to successfully live well on a farm. Patience and creativity top the list. Things would break, or rain would ruin the plans for the day, and you’d have to be flexible and inventive, taking it all in stride, or you’d go crazy. The very first day we were there, to my embarrassment, I broke the giant glass jar they used to make butter. I watched in horror as it slipped through my hands and shattered on the floor. And their response? They immediately got to work and figured out a new system for making butter on the spot. That kind of creative problem solving happened all the time, and helped me realize how much I needed to adopt that attitude in every area of my life. If something isn’t working as it should, what can I do to find a workaround rather than just getting frustrated?

As we worked, we realized that all the benefits my husband had anticipated were there in spades on the farm. We spent most of the day outside and our son had the time of his life exploring and helping and playing. We felt better and were less stressed while living on the farm. The downsides were there too: it’s hard work, and touch and go from season to season as far as making a profit goes. And while farming allows for more family time if you’re all working together, it’s still quite similar to having a full time job with work after hours for everyone involved.

With all that we were able to experience, we’ve been talking and praying about the future. Full-time farming might not be for us, but living on some land with a small homestead-type farm is very appealing. And now when my husband looks at me and says, “I want to farm,” I can look back at him and can honestly say, “Me, too.”

Read more:
New research shows that allowing your family to wear their shoes inside is a bad idea