The northern Italian church that appears to be suspended in air

Photo by Ciarán Flood from Pexels

The “Santuario della Madonna della Corona” was carved into a mountain overlooking a dramatic cliff above Lake Garda.

Most tourists come to Verona, in northern Italy, to admire the world-famous balcony featured in Shakespeare’s Romeo and Juliet. But not many visitors know that just a few miles north of Verona lies one of the most unique churches of Europe. The “Santuario della Madonna della Corona,” literally the Sanctuary of Mary of the Crown, was built in 1530 by carving into the rock face of Mount Baldo in the Gerdeneses Alps. In its spot clinging to the cliff above Lake Garda, it looks as if it is suspended in air. 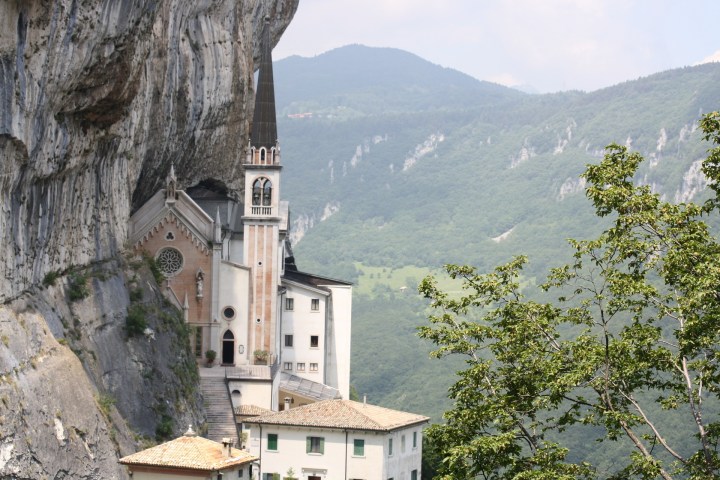 The origins of The Church of Mount Baldo, as locals call it, go back to the 14th century, when the natural cave formations started to attract holy men looking to spend periods of reflection and prayer. In 1530, when the earliest structure of the current church was built, it could only be reached by a tiny passage hanging down the cliffside. For a long time, only the most adventurous believers dared to reach the church. Indeed, one of the local noblemen decided to mark his dedication to the hard-to-reach church by leaving a 70-cm tall stone statue that still bears his family’s name.

For the past 500 years, locals have tried to make this

seemingly suspended church
more accessible. First, they built a wooden bridge at the bottom of the valley so that visitors no longer needed to cross a river to get there. Then, during the 16th century, they built two large staircases that led up to the church, sparing people from walking along a rocky and windy path.

By 1625, as more and more pilgrims were flocking to this remote corner of northern Italy to visit the church, locals decided to build a bigger structure located 13 feet above the first church, which was incorporated in the presbytery of the new church.

The church remained intact throughout the two world wars that plagued the region in the 20th century; however, it incurred serious damage due to wear and tear. In 1974 local Bishop Giuseppe Carraro asked Guido Tisato to refurbish the church. Tosato decided to demolish the existing construction to build a new one based on more solid foundations. By 1978 the new church was consecrated by Bishop Carraro and by 1982 it entered the list of “minor basilicas” of Italy. But what can be considered the highlight of its 500-year-old history occurred in 1988 when Pope John Paul II visited the basilica and led believers in a collective prayer service to the Madonna of the Crown.

Plan a visit: From Verona, take a local train until Peschiera del Garda and then buses (483, 476) to Spiazzi. You will see signs indicating the beginning of the path to the “Santuario della Madonna della Corona.” Guided pilgrimages can be booked through this website.