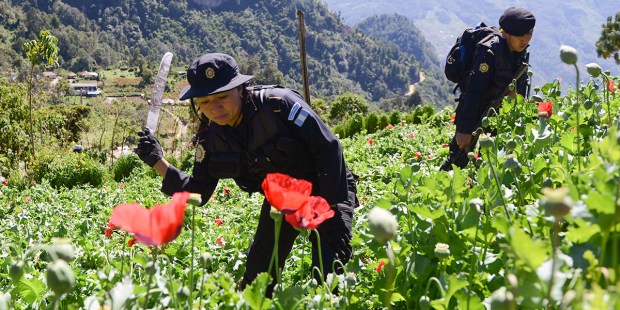 With heroin prices falling because of cheaper fentanyl, it’s no longer profitable to grow poppies.

The opioid crisis in the United States has devastated lives, families and communities. But it may have had an unexpected side effect on the endemic drug cartel problem in Mexico.

According to a Catholic bishop in Guerrero State, the rise of synthetic fentanyl has led to a collapse in the illegal economy of planting opium poppies and processing heroin in Mexico. Ordinary people, who have relied on growing opium for easy money, have been suffering hunger because of the inability to compete with the much cheaper synthetic drug, said Bishop Salvador Rangel Mendoza of the Diocese of Chilpancingo-Chilapa.

With the crash in heroin prices, some drug cartel leaders “no longer want to fight because it doesn’t make sense,” Bishop Rangel told Catholic News Service. “What are they fighting over? … Now, nothing.”

Bishop Rangel is urging the Mexican government to hold talks with armed groups, including cartels, saying many in the illegal drug business are unable to make ends meet and are “seeking an exit.”

“If the government wants to dialogue with these criminal groups, … I think that’s good,” he said. “To get peace you have to dialogue, even with Satan, with whomever it might be to get peace. But they have this point of view that we don’t want to talk because they break the law. At least you have to listen to them.”

“There won’t be dialogue with members of organized crime groups, as they’re called. We don’t have that relationship,” he said. Rather, he said it’s important to “attend to the causes that originate insecurity, violence. That’s what we’re doing, rescuing the countryside so there’s work, so that young people are attended to.”