As Boko Haram’s reign of terror continues in Nigeria, the Christian faith persists 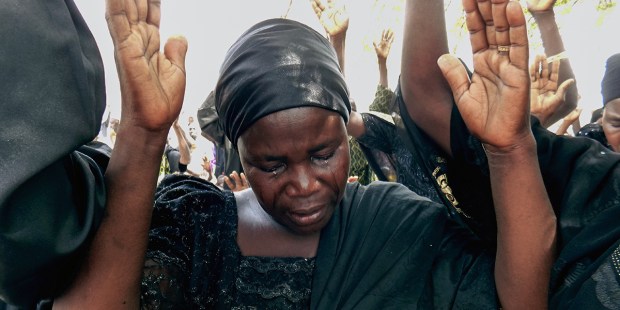 “The faith of the faithful is becoming stronger,” even after 10 years in which 40,000 people have died and two million have been left homeless.

It has been 10 years since Boko Haram began its reign of terror in northeastern Nigeria, with inroads into Cameroon, Chad and Niger. Since 2009, in clashes with the Nigerian army and in attacks on towns, churches and mosques, some 40,000 people have died and two million have been left homeless, with millions more dependent on humanitarian aid. Hundreds of people, particularly women and girls, have been kidnapped, tortured and forced to convert to Islam.

The Diocese of Maiduguri in Borno State, the birthplace of Boko Haram, has been particularly hard hit the terrorist group, which has remained active despite recent military setbacks. Aid to the Church in Need (ACN) spoke with Bishop Oliver Dashe Doeme of Maiduguri about the current situation.

How is the Diocese of Maiduguri presently doing?

For much of the past 10 years the Church in Maiduguri has experienced severe persecution at the hands of Boko Haram. But, at the moment, things have improved greatly. Many, though not all, of our people who were displaced have returned to their ancestral homes. The faith of the faithful is becoming stronger. Some of the destroyed structures have been rebuilt.

We give thanks and praise to God for his mercy and kindness towards his children in the Catholic Diocese of Maiduguri. To God be the glory.

The diocesan Cathedral of St. Patrick’s, which had been gravely damaged by Boko Haram, was rebuilt and rededicated in July. What does that mean for the local Church?

Our cathedral and other structures within the compound suffered two bomb blasts in 2012. Thanks be to God, no lives were lost. The dedication of the newly rebuilt cathedral is a clear sign that victory has been won by God for his people and it marks the beginning of the Church’s recovery from the crisis.

In 2014, more than half of the territory that our diocese comprises was under Boko Haram control. At that time, we could not have imagined a rebuilt cathedral. Amazingly, the parishioners of St. Patrick’s Cathedral Maiduguri were able to raise up to three-quarters of the funds needed to rebuild the cathedral.

The greatest asset the Church possesses in the midst of persecution is the faith of the people. ACN has been a huge help as well.

What other damage was done to the diocese?

The list is very long:  The compound of our minor seminary in Shuwa was turned into a terrorist camp; many of the buildings were eventually burned down. Again with the help of ACN, the seminary has been reconstructed.

We also lost our catechetical training center in Kaya. The terrorists badly damaged or destroyed two convents, two mission hospitals, more than 15 schools, more than 10 rectories, and more than 250 parish and mission station chapels and churches.

But we give thanks to God for the tremendous improvement in the security situation. All the priests have come back to their places of apostolate. Out of the 44 parishes and pastoral areas that we have in the diocese, only three parishes are still not functioning due to continuing attacks that occur there.

What is your message to ACN and its donors?

The suffering Church is praying for all of you. May the good Lord who can never be outdone in generosity reward you all with his peace in this world and with eternal life in his Kingdom.

This article was first published at Aid to the Church in Need’s website, and is republished here with kind permission.