Are the relics of Christ and the Apostles authentic?

The historic documentary 'The Footprints of Jesus' by Rome Reports answers these and other questions.

The mortal remains of Saints Peter and Paul, pieces of Christ’s cross, the stairs that Jesus climbed during his Passion … Over hundreds and hundreds of years, millions of pilgrims from around the world have visited Rome to pray before these and other relics. But, are they authentic? 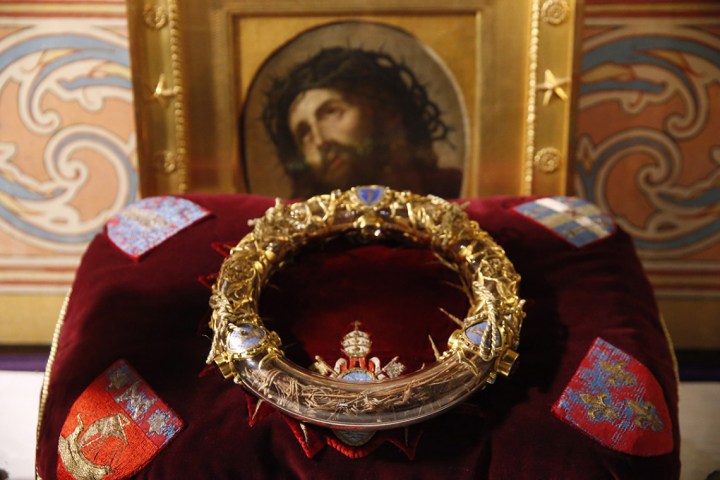 This question, which has been the focus of significant debates throughout history, is being addressed by the documentary The Footsteps of Jesus in Rome, presented this September 16 in the Spanish Embassy to the Holy See. It was produced by the audio-visual news agency Rome Reports.

The documentary is a 46-minute film that explores, with previously unpublished images, the origin and stories of the numerous relics of Christ and his Apostles located in the Eternal City.

Viewers will discover, for example, that Michelangelo’s cupola, which rises over the main altar of St. Peter’s Basilica in the Vatican, rests upon four columns with niches in which statues can be seen that refer to relics related to the life of Christ.

Among them is a statue of the Roman centurion Longinus, who pierced Jesus’ side with a lance as He hung on the cross (John 19:34). The statue was placed in this location, which is so important for Christianity, because it is here that the tip of that lance is kept; according to tradition, it was given to Pope Innocent VIII (pope from 1484 to 1492) by Turkish sultan Bayezid II.

The Cross of Christ

Another of the columns supporting the cupola of St. Peter’s Basilica is dedicated to St. Helena, the mother of the emperor Constantine, who in the year 327 undertook a pilgrimage to the Holy Land where she was to find, on Mount Calvary in Jerusalem, the true cross of Jesus. A piece of that cross is kept today in the Church of the Holy Cross, in Rome.

Remains of Sts. Peter and Paul

Among the Christian relics in Rome, the documentary gives particular importance to the mortal remains of the two great Apostles. The tomb of the Apostle Peter gave origin to what is today the grandiose Vatican Basilica, and the Tomb of the apostle Paul is under the Basilica that bears his name outside the walls of the ancient city of Rome.

The documentary shows how archaeology has made it possible to prove that, throughout the past 20 centuries, the followers of Jesus have maintained an uninterrupted tradition of devotion and conservation with the greatest care surrounding the remains of these two saints.

The true meaning of relics

These historical witnesses are not irrefutable proof of the truth of Christianity, explained the presenters of the documentary.

Andrea Tornielli, editorial director of the Dicastery for Communication of the Holy See, said during the presentation of the documentary that “God’s method does not consist in offering irrefutable historical proof to affirm the faith.” If such were the case, he said, it would not respect the freedom of believers.

However, Tornielli added, “archaeology—blessed archaeology—offers us indications that all allow us to support the faith.”

The documentary was presented days after Pope Francis sent a letter explaining why he sent the Orthodox patriarch of Constantinople, Bartholomew I, fragments of the mortal remains of St. Peter, formerly kept in the Vatican, as a gesture of fraternity.

The position of the popes

After years of archaeological studies on the foundations of the Vatican Basilica, Paul VI publicly announced on June 26, 1968, that “we have reason to believe that the few but sacrosanct mortal remains of the Prince of the Apostles,” namely Peter, “have been found,” under the main altar.

The pope limited himself to reporting the opinion of the archaeologists, but at no point did he declare that believing in the authenticity of this discovery was an obligation of faith for Christians. In fact, the pope himself recognized that this announcement “does not mean the studies, verifications, discussions, and polemics will end.”

The documentary was introduced by Maria Del Carmen De La Peña Corcuera, Spanish ambassador to the Holy See, who welcomed the guests to the event.

Relics, an aid to prayer

Cardinal Giovanni Battista Re, Sub-Dean of the College of Cardinals, expressed his gratitude for Rome Reports’ production (directed by journalist Antonio Olivié) for using historical and cinematographic elements to brings to life 20 centuries of history, helping viewers understand the suffering of Christ during his Passion.

“We’ve been able to see all that Christ suffered for us; his death on the cross was something truly terrible,” he said when the documentary ended, his voice breaking with emotion.

Relics are “an aid to faith and prayer,” he emphasized.

Why make this documentary?

The production of the documentary was sponsored by the Doctor Ramón Tallaj Foundation. Versions have been prepared in Spanish and English, and it’s ready for worldwide distribution, principally through TV channels.

In his words during the presentation, Dr. Ramón Tallaj, who is also the president of Somos Community Care, a healthcare network offering care to 650,000 patients in the New York City area, explained that this documentary makes it possible to understand how “through the centuries, starting with the first Christians, Rome became the center of the Catholic Church, down to the present day.”

“Faith in Christ is inscribed in the soul of the Eternal City in a very deep way, and it was our desire to reflect that and project it in this documentary,” Dr. Tallaj continued.  Originally from the Dominican Republic, Dr. Tallaj is a nationalized American citizen.

“Rome is a reference point for all Christians, especially for those of us who are Catholic, ” Dr. Tallaj concluded. “Our faith isn’t a legend, nor is it based on mythological stories. The Christian faith is based on an historical fact: the person of Jesus of Nazareth, and the way of life he proposed with all his words and deeds. A way of life that has been lived and proclaimed to the world starting with the first believers.”