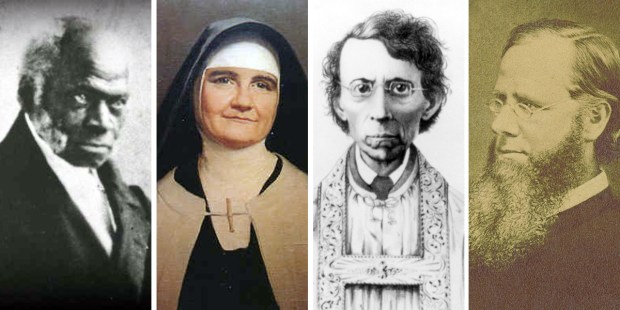 Eastside, Westside, Uptown and Downtown, holy men and women who have sojourned in the Big Apple have become models for the rest of us.

Click here to launch the slideshow
If ever there was a city that could provide the raw material for the making of a saint, New York surely has it all. Think about it: If you want to put your patience to the test, try waiting in Manhattan traffic. If you want to practice mortification, take a walk through the Grand Central Market and resist buying something scrumptious. If you want to exercise “custody of the eyes,” well, there are opportunities all over the place.

And in a dog-eat-dog world of competition to get ahead of everyone else, there’s lots of room for humility. Of course, there are plenty of opportunities for charity, with beggars and homeless people everywhere who could use a kind word, if not a dollar.

Many saints already have New York ties—Elizabeth Ann Seton, John Neumann, Frances Xavier Cabrini among them—and many are in the process of being beatified or canonized. Their stories are worth a rehearing. In this slideshow, take a look at 12 who are in various stages of the process by which the Church declares individuals saints.

There is, for example Blessed Solanus Casey, who was beatified in 2017, putting him just one step away from canonization.

There are several who are called “Venerable,” which means the Vatican has found that the candidate lived a life of “heroic virtue”: Pierre Toussaint, Mother Mary Angeline Teresa (Bridget Teresa McCrory), and Felix Varela.

There’s also Fulton J. Sheen, who will soon leave the category of Venerable, as the Vatican recently announced that he will be beatified.

Then there are the “Servants of God,” a designation indicating that a cause for canonization has officially begun: Isaac Hecker; Rose Hawthorne Lathrop; Catherine de Hueck Doherty; Dorothy Day; Terence J. Cooke; Bernard J. Quinn, and Francis Xavier Ford.