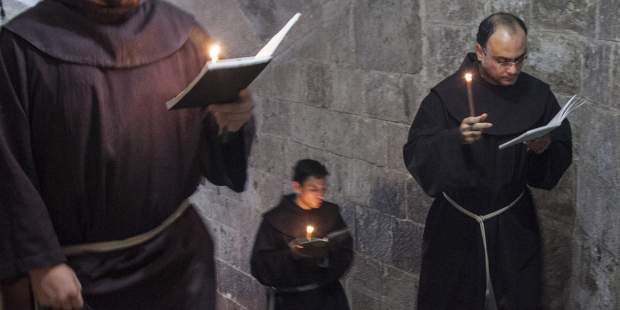 How do you say “beer me” when you’ve taken a vow of silence? You “knead one hand over the other.”

During the Middle Ages in Europe, monks living in monasteries followed St. Benedict’s Holy Rule, a set of instructions governing how they lived their daily lives communally. Permission to speak, Benedict, wrote, should “seldom be given,” for “in much talk thou shalt not escape sin” (Prov 10:19).

Living under a vow of silence with other people presents certain difficulties, as a manuscript entitled Monasteriales Indica, discovered at Christ Church at Canterbury in England, reveals. To facilitate life together without resorting to speech, the monks came up with a language of hand gestures.

Here are some of the hand signals medieval monks used, according to a translation from Old English in a paper on monastic sign language in 11th-century England by Lord Dmitri Skomorochov and Anakhet al-Badawiyya.

• First, the abbot’s sign is to set two fingers on your head and at the same time grab your hair.

• The deacon’s sign is that one should make a motion with one hand hanging, as if to ring a small bell.

• To indicate the prior, raise your forefinger over your head, for that is his sign.

• If you would have a sacramental wafer, bend your forefinger to your thumb.

• When you would have a censer, move your hand downwards and move it back and forth, as if swinging.

• If you would have a candlestick, blow on your forefinger and hold your hands locked together as if you had a candlestaff.

• If you need a small candle, blow on your forefinger.

• If you would have a Bible, move your hand back and forth, raise up your thumb and set your hand flat against your cheek.

• If you wish a sitting man to rise, turn your hand and move it up quickly in stages.

• If you wish him to sit, then turn it downward and move it down in stages.

• When you would have a whip, move your fist back and forth as we described before, and raise up your two fingers.

• If you need a knife, cut with one finger over the other as if carving.

• The sign of porridge is to move your fist back and forth as if stirring porridge.

• When you would like cheese, set your two hands flat together, as if pressing.

• If you would like milk, stroke your left finger with your right hand as if you were milking.

• The sign of honey is to set your finger on your tongue.

• When you would like fish, move your hand back and forth the way a fish moves its tail, when it swims.

• When you wish to drink, lay your forefinger along your mouth.

• The sign for beer is to knead one hand on the other.

• The sign of the razor is to put one forefinger over the other, as if carving and then to stroke your cheek with your finger as if shaving.

• The sign for a fur garment is to stretch forth your left sleeve and pluck the inside with your left hand.

• The sign of the king is to move your hand down, then seize your head on top with all your fingers in the shape of a crown.

• The sign of a layman is to take yourself with both hands by the chin as if taking yourself by the beard.

• The sign of a laywoman is to move your fingers across your forehead from one ear to the other in the sign of a headband.