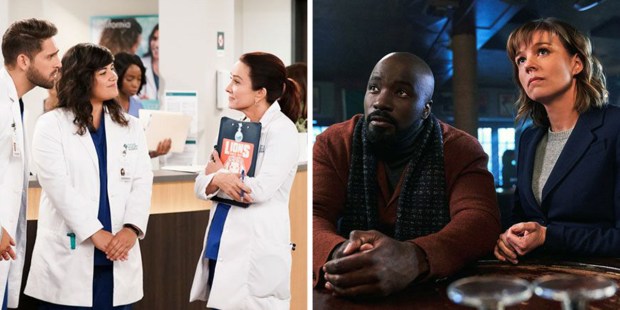 The Catholic actress Patricia Heaton and a Scooby-Doo gang of investigators into paranormal activities are featured in the network’s fall line-up.

A 2016 analysis from Georgetown University suggested that the socio-economic value of religion in the United States is worth roughly $1.2 trillion, a number that surpasses the earnings of Apple, Amazon, and Google combined. That’s a lot of potential revenue for advertisers to tap into. Little wonder then that television networks, not organizations one typically considers bastions of religiosity, still continue to court Christian viewers. This Fall CBS hopes two new shows, Carol’s Second Act and Evil, will be the ones to lure in the coveted faith-based demographic.

On the surface, Carol’s Second Act seems an odd choice to market towards Christians, as its basic setup has no explicit religious overtones. The show revolves around a 50-year-old former schoolteacher who, following her divorce, has decided to pursue her real dream of becoming a doctor. Most of the humor in the show is derived from the obvious age difference between Carol and her much younger compatriots as they try to survive the soul-crushing rigors of internship.

The expected draw is obviously the show’s star, Patricia Heaton. The three-time Emmy winner has become something of a social media darling among the religious minded as of late, thanks to her various tweets in which she opposes abortion and confesses to shedding tears while receiving Communion. Carol’s Second Act is the first show in which Heaton is the sole headliner, and you can tell she’s eager for the challenge. As for the show itself, like any new sitcom it still needs some time to find its feet and establish chemistry between its cast. However, it does clear the first major hurdle of any comedy in that there are laughs to be had. Overall, the show is good-natured enough to give a chance, and it never hurts to be reminded that some people are good at things because they are old, not in spite of it.

Evil is a different thing altogether, with nary a laugh to be found. Equal parts drama, horror, and courtroom procedural, Evil follows a small group of investigators hired by the Catholic Church to verify or debunk the various demonic possessions, miracles, and other strange phenomena she is called upon to help with.

The team is made up of three disparate individuals. Kristen is a lapsed Catholic psychologist who probes for medical explanations behind the various occurrences. Ben is a former Muslim turned atheist who uses his computer skills to ferret out any technological trickery involved. David is a smoldering hunk of a priest-in-training who, although a true believer, isn’t quick to accept supernatural explanations. They’re sort of a Scooby-Doo gang with an imprimatur.

The various angles from which the three approach each case allow for a number of interesting discussions to arise. Over the course of the first four episodes, questions offered up for debate include whether or not evil is a real thing, are science and religion compatible, how can one become a priest during this time of scandal, and why do some people suffer while others prosper? Those well versed in Church teaching may wish David’s explanations of the Church’s side of such arguments were a bit heartier, but nevertheless, at least they’re given equal time.

Well, except for one odd moment in Episode 3 in which the seminarian is asked if he approves of the Church’s “treatment of gays” to which he quickly responds, “No, I don’t!” The question comes out of the blue with no explanation of what this horrid “treatment of gays” is supposed to be, it has nothing to do with the story being told, and it’s quickly forgotten after David’s answer. It’s a few seconds that feel clumsily inserted into the show as if to say to some potential audience members, “Hey, we’re aware of what you think you know about the Church, and we’re not like that.”

That particular glitch aside, the show is fairly interesting in its approach to the subject matter. While each episode so far ends with a non-supernatural explanation being given for each occurrence, it is still explicitly implied that there actually is an ongoing spiritual battle between Heaven and Hell, and our heroes are smack dab in the middle of it. Kind of like real life.

Speaking of which, if for nothing else, Evil deserves a watch for the moment in Episode 2 where David is trying to pray the Rosary before going to sleep while a demon (real or imagined?) sits at his bedside. At first the spirit tries to throw David off with thoughts of sexual temptation. When that fails to get the desired result, the demon begins to babble Abbott and Costello’s “Who’s on First?” in a last-ditch effort to keep David’s mind distracted. To anyone who has ever tried to pray the Rosary, that right there is as real as it gets.