See The Lord of Miracles continue to pour Grace upon those who love Him.

A lone taxi tore through a puddle, spraying water on the passersby, as droves of umbrella-toting faithful made their way up the steep stairs of St. Paul the Apostle on 60th Street, the weather forecast making good (for once) on its unwelcome prediction of 100% precipitation.

As the soggy churchgoers found their way to the pews of the massive edifice with its 100-foot domed ceilings, a swell of purple-clad men in regal regalia gathered around the baptismal font, preparing to take their place behind the broad altar.

This much anticipated day for the metro-area’s Peruvian Catholic community has blood ties to similar events around the world: the celebration of El Señor de Los Milagros (The Lord of Miracles). In their homeland as many as half a million devotees participate in Mass beneath the dome of the unending blue skies and then a procession winds its way through the streets of Lima, Peru.

If it weren’t for the rain … 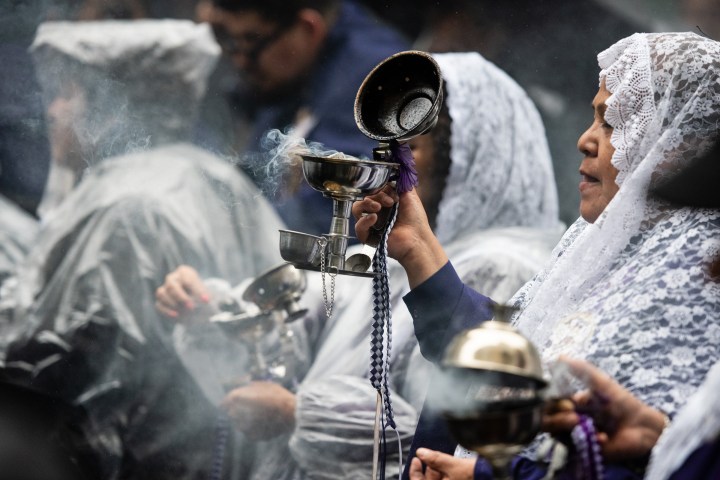 The tradition dates back to the mid 1600s, and is based on an incredible tale that begins with an unknown Angolan artist. An enslaved person, the artist rendered an incredible painting on an adobe wall, depicting Christ enduring the pain of crucifixion, God the Father, and the Holy Spirit in the form of a dove overhead, with a radiant Blessed Mother, pierced in the heart by a sword, and Mary Magdalene weeping at his feet.

But that’s just the beginning.

In early 1655 a devastating earthquake ravaged the city, destroying nearly every building — except for the wall portraying the image, which did not have even the slightest crack.The image was discovered some years later by a man named Antonio De Leon, who set about building an altar near it. When he was struck down by illness, he was miraculously cured.

In 1671 the community, seeing this as a miraculous event, began venerating the image. Upon hearing of this, the local authorities ordered the image destroyed. But with each attempt to deface or destroy it, the person tasked with the job would experience some powerful reaction. One person who was to paint over it began to shake and tremble in fear the closer he got; a soldier who went to break it perceived Christ grow in beauty and the crown of thorns turn green … and so on.

Seeing that something extraordinary was occurring, and yielding to the protests that ensued, the Viceroy relented in uncertainty and the image remained.

But it was in 1687 that things really took a turn. A tsunami tore through the province, destroying much in its path, including the chapel that was built around the image, but the image remained untouched … again.

At this point the Catholic officials deemed something supernatural was occurring and recognized that there was a sacred dimension to this painting. The local church communities organized the first procession honoring Christ and this miraculous image, and for three centuries up to the present day the procession in Lima has become one of the world’s largest. And as Peruvians emigrated to other parts of the world, they proudly carried the tradition around the globe.

In the early 1970s — much in the same way immigrants brought the feasts of San Gennaro, San Rocco, and St. Patrick to this great city in the previous century — the Mass and Procession of Señor de los Milagros became an important part of New York’s Catholic culture. It began with a small group of Peruvians at the now shuttered St. Benedict the Moor Church on West 53rd Street in Hell’s Kitchen, and was welcomed to St. Paul’s by Fr. Gil Martinez, and then found its home at the church of St. Paul’s years later.

According to Doris Cuya, whose father was one of the founders of the New York celebration, “Our main purpose is to continue the tradition of our country, Lima, Peru and we want to be thankful for everything He does for us and the miracles that He does.”

As the devotees spilled out of the dry church to the wet city streets, gazing cautiously skyward, the rain seemed to subside but for a moment. The forecast was for more heavy rain and thunderstorms at that exact time, and they were perhaps a little late in coming.

As the procession moved west down 60th Street and censers piled high with incense were lit, bringing thick smoke to rise to the heavens along with the prayers, clouds of balloons, and a few doves, something incredible happened …

The sun came out.

Perhaps it was a weather anomaly, or perhaps the forecasters just got it wrong, but then again this is the Lord of the Miracles we’re talking about.

PRAYER TO THE LORD OF THE MIRACLES

Lord of Miracles
to you we come in Procession
your faithful devotees
to implore your blessing.
Guiding beacon gives our souls
faith, hope, charity.
Your divine Love enlightens
us, makes us worthy of Your Goodness.
With the firm step of a good Christian,
let us make our Peru great.
And together as a force, we beg you to give
us your light. Amen.