Pope: Because of the laity, Christianity has come to us 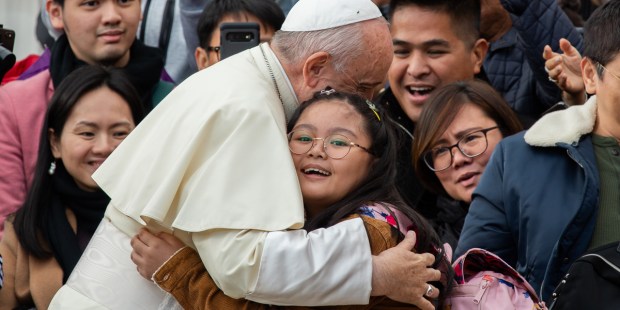 The persecution of the Jewish people is “neither human nor Christian,” Pope Francis fervently denounced during his general audience on November 13, emphasizing his point with off-the-cuff remarks during his continuing reflections on the Acts of the Apostles.

In front of a crowd of pilgrims gathered in the rain, Pope Francis commented on Acts 18:26, which highlights a Jewish couple, Priscilla and Aquila, who welcomed Saint Paul. They had fled to Corinth after the expulsion of the Jews from Rome ordered by Emperor Claudius.

The Jewish people have “suffered so much” throughout history, the Argentine pope spontaneously commented. We might believe that those days are over. However, these persecutions are beginning to reappear here and there, he said. “This is neither human nor Christian,” he said forcefully. “The Jews are our brothers and must not be persecuted. Understood?” he said.

Continuing his catechesis after this parenthesis, Pope Francis once again praised the attitude of Priscilla and Aquila, who risked their lives for the Apostle Paul. The pope gave thanks for all those families who, at the risk of their lives, have helped the persecuted. This couple reminds everyone that it is thanks to the “commitment and evangelization of so many lay people” that Christianity has come to us.

As a fruit of their baptism, lay people are responsible for spreading the Gospel, the pope emphasized, encouraging couples to listen to their vocation. They are the ones who give fertile ground for the growth of the Church, the Roman Pontiff continued. Couples are also a “true, living icon” of the Lord. The Bishop of Rome thus expressed the desire that couples make their homes into “domestic churches” where communion is lived, in the image of Priscilla and Aquila.

Read more:
On the road to sainthood: Family of 9 murdered for hiding Jews in Poland

Ahmed el-Tayeb to be received in audience

At the end of his catechesis, the Supreme Pontiff launched a special appeal for Burkina Faso, a country suffering from “recurrent violence.” On November 6, an attack in the eastern part of the country claimed the lives of “nearly 100 people,” he said. The Argentinean Pontiff entrusted to the Lord the victims, the wounded, the many refugees, and all those who are suffering from this tragedy. The head of the Catholic Church also called for the protection of the most vulnerable populations.

Civil and religious authorities in particular must increase their efforts to this end, in the spirit of the document on human brotherhood for peace in the world and common coexistence “to promote interreligious dialogue and harmony,” he said.

This declaration was signed on February 4, 2019, by Pope Francis and Ahmed el-Tayeb, rector of the al-Azhar Mosque. The headquarters of al-Azhar University, this institution is one of the oldest Islamic educational institutions in the world. The Pope will also receive Ahmed el-Tayeb in private audience at the Vatican on November 15.

In addition, at the beginning of his audience, the pope offered a special thought for the sick, who remained in Paul VI Hall during the audience because of the rain. Speaking to Czech pilgrims, he greeted in particular a group that had come to commemorate the anniversary of the canonization of Saint Agnes of Bohemia. Among them was Cardinal Dominik Duka, archbishop of Prague. According to the pope, Saint Agnes continues to inspire us so that we can live the Gospel with “renewed enthusiasm.”