ACN-USA’s “Night of Witness” focused on plight of persecuted Christians in Sri Lanka, the Philippines and Pakistan 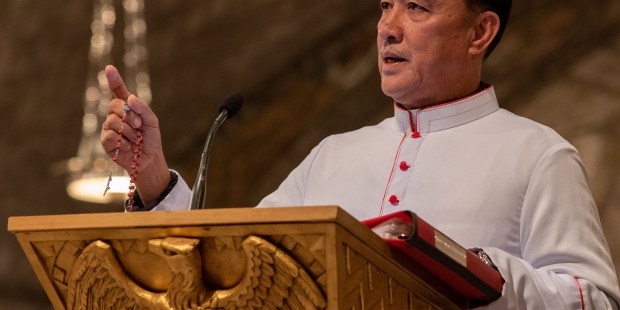 The 2019 “Night of Witness” was held Nov. 23, at the Basilica of the National Shrine of the Immaculate Conception in Washington, DC.

The suffering of persecuted Christians and the memory of today’s martyrs were the focus of Aid to the Church in Need-USA’s second annual “Night of Witness,” combined testimony with a celebration of Vespers. The 2019 “Night of Witness” was held Nov. 23, at the Basilica of the National Shrine of the Immaculate Conception in Washington, DC.

Two witnesses for the persecuted Church made presentations: Father Neville Fernando, TOR, one of the first responders to arrive on the scene of the 2019 Easter Sunday bombing of St. Sebastian’s Church in Negombo, Sri Lanka; and Msgr. Romeo Saniel, OMI, who heads the Vicariate of Jolo in the Philippines, and whose cathedral was bombed by jihadists in January 2019. A third witness, Daughter of St. Paul Sister Ghazia Akbar, could not be present, but her testimony was read.

Msgr. Saniel spoke of caring for the wounded and comforting those who lost loved ones in the bombing of Our Lady of Mount Carmel cathedral, which killed 26 people: “I blest and buried the burned bodies of people I personally know, like Romy, Leah, Juliet, Cherlyn, and Daisy, whose faces were beyond recognition.”

“My heart broke and I felt the excruciating pain seeing so much blood, loss of innocent lives, and destruction.”

He also recalled how 17 years ago, he narrowly escaped death, when young Muslim extremists put a gun to his head: “I felt the cold nozzle of a .45 caliber pistol at the back of my head. Then I heard ‘click.’ Miraculously, the weapon jammed.”

He continued: “I realized the Lord saved me for a reason. Since this traumatic incident, I have turned this wound into wisdom by devoting myself to work for interreligious dialogue.”

Father Neville recounted the Easter morning bombing of St. Sebastian Church in Negombo:
“I entered through the main gate of the church and suddenly I heard the explosion. Black smoke was spreading everywhere. I ran towards the church and saw dead bodies strewn across the floor.”

“There were many body parts, heads, legs, and hands, moistening the church floor with blood. There was lamentation and screaming of the people looking for loved ones. It was a horrible sight.”

He concluded: “What has inspired me and given me great hope is that the people who have suffered most have in many cases shown the most faith and courage in the aftermath of the atrocities.”

“They have lost so much and yet they are full of trust in the Lord. Your prayers both on the day of the Easter attacks and since have emboldened us to carry on and give witness to Christ.”

In her message, Sister Akbar said that “fanatic Muslims hate Christians and push hard to convert them to Islam. This hatred is manifested in the use of the anti-blasphemy law targeting Christians and other minorities.”

She added that “Christians are relegated to demeaning, back-breaking jobs of sweeping, cleaning gutters and sewers, brick-making or we become house servants.

She also pointed at “the kidnapping and forced conversion to Islam of Christian and Hindu girls ages 9 to 15.” “Most of these cases go unreported to the biased and hostile attitude of law enforcement,” she added.

Nonetheless, Sister Akbar stressed that Pakistan “is our homeland, and we Christians love our country, our mother soil, with a true spirit of patriotism marked by a spirit of love, loyalty, sincerity and purity.”

“We are working for the Pakistan’s development, the betterment of our country, serving it in every possible way and willing to sacrifice our lives.”

Preceding each of the presentations was a reading of the names of priests who were martyred in the past year.

Presiding at Vespers was Archbishop Christoph Pierre, papal nuncio to the US. The archbishop spoke of the Pope Francis’ “gratitude to those who have highlighted the plight of persecuted Christians, who have, in the face of persecution, witnessed to the saving power of Christ.”

He concluded; “The fidelity of persecuted Christians, of every denomination, to the Gospel, often at the cost of their lives, represents an outstanding form of ecumenism and a summons to all Christ’s followers to unite in prayer and practical solidarity on their behalf.”

Photo is of Msgr. Romeo Saniel.

This article is republished here with kind permission from Aid to the Church in Need. To learn more visit www.churchinneed.org