Manhattan Bridge Tower in Brooklyn, New York City, Framed through Nearby Buildings. Brooklyn Remains One of America's Best Surviving Examples of a 19th Century City in spite of the 'warfare' that raged through the 1960's and 1970's.

From sheltering homeless youth to being the birthplace of Grassroots Films, St. Francis House is the crown jewel of Greenpoint.

Greenpoint, also known as Little Poland, was one of the most innovative and productive areas in New York City back in the day. Having to its credit the construction of the USS Monitor, The New Republic (the largest wooden ship ever built), and more than 50 oil refineries, it was even home to the ubiquitous Eberhard Faber pencil company.

It was a neighborhood that one never would have imagined the sun proverbially setting upon.

But empires crumble, and in the late 1960s, amid a stark decline in industry, social unrest, and the emergence of devastating crime waves, Greenpoint, in tandem with all of Brooklyn, slowly descended into hell. 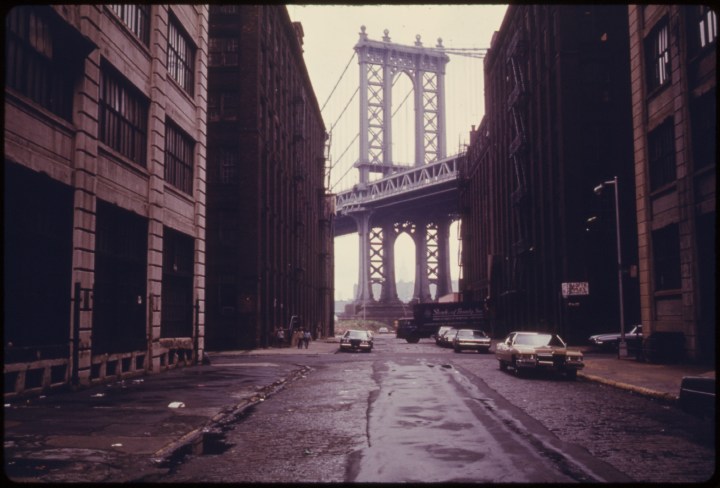 Poverty, gang violence, and rampant drug use spread like wildfire throughout the borough, ripping apart communities and families as the lack of work tore apart the fabric of the once proud community built on the blood and sweat of immigrants. And with that, a sharp rise in broken homes led to a growing population of homeless youth, often drug addicted and desperate, turning to any means necessary to survive.

Before long the St. Francis House was filled to capacity, providing a safe haven and structured environment. It offered a Christ-centered foundation on which its residents could find purpose and return their lives to the hope and promise that young people need. Over the next two decades, hundreds of young men found their way, thanks to the little house.

When Joe Campo arrived with his sons Michael and Christopher in 1990 and took over the responsibilities of running the home, another chapter would begin. He became Grandpa to all the residents, counseling, encouraging and becoming the rock wall between what plagued the streets and the boys under his watch. Driving away drug dealers just beyond the doors and organizing the house to be a true home with evening dinner and prayer, he was always present to listen and counsel.

After about 15 years of being a father to the fatherless, a radical idea came to Campo.

Realizing that many of the boys couldn’t find work and lacked job skills, Campo decided to make a movie about the St. Francis House. A photographer by trade, he gave jobs to each of the residents as grips and cameramen and taught them about production. And they went on to create the first film produced by what would become Grassroots Films.

Since then, the film company has gone on to produce multiple award-winning movies, including The Human Experience, Fishers of Men, Outcasts and a wide variety of commercials and short films.

The St. Francis House is a house of hope, empowering those who pass through its doors to achieve lives of meaning and purpose. But it’s taken on new roles over the years, covering college tuition, supporting families in need, and paying for the funerals of those who didn’t make it out. It’s become a bulwark in a raging storm whose winds are poverty and despair.

In spite of the success of his film career, Joe is still there serving on the front lines, living each day to serve the boys who lack the presence of a father in their lives and guide them to discover their greatness.

Please keep St. Francis House in your prayers. For information on how you can help keep the mission going, visit : http://www.stfrancishousebrooklyn.com/