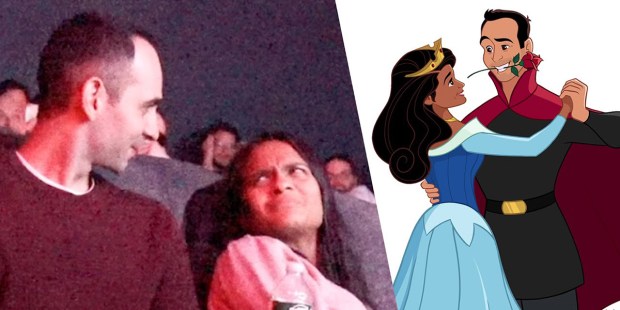 The devotion of Lee Loechler to his future bride resulted in a fairytale proposal.

It takes a lot of courage to propose to your beloved. There are so many things to consider, including the proposal itself. One talented filmmaker from Boston decided that if he was going to do this once in his life, it had better be memorable.

So using his artistic talents, Lee Loechler spent a full six months altering the animation of his then-girlfriend’s favorite film, Sleeping Beauty. He then rented out a screening room at a theater, printed fake movie tickets, and gathered together friends, family, and random strangers so his high school sweetheart, Sthuthi David, would remain unaware of his plan.

While she watched the movie, Loechler looked eagerly on to see his proposal unfold on the big screen. The famous Disney characters morphed into cartoon characters of the young couple before the ring came out and then became real in Loechler’s hands. With perfect timing, Loechler got down on one knee and proposed. The proposal itself was funny, personal, and took place in front of the couple’s friends and family — unbeknownst to David who hadn’t noticed they were even in the audience.

With many dubbing the proposal as the “greatest ever,” reported by Upworthy, Loechler has perhaps upped the game for those looking to propose in a memorable way. But if you’re not creative, or if you’re low on funds, the best proposal is always one that comes from the heart.

In the meantime, take a look at what is surely one of the most magical proposals ever:

Read more:
This man’s double proposal will have you in tears