Newman’s advice on taking advantage of this ‘Lentiest Lent’ 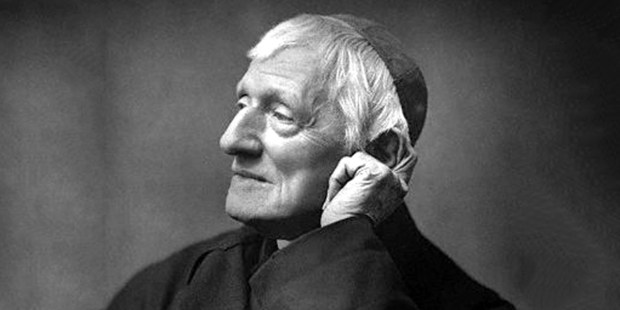 Let us, then, determine with cheerful hearts to sacrifice unto the Lord our God our comforts and pleasures, however innocent …

“It’s like Lent has been imposed on us this year with this (coronavirus) pandemic,” said Dr. Ryan Marr during a recent interview. But, he continued, St. John Henry Newman would remind us to maintain our focus on that which is truly lasting.

Quoting one of Newman’s essays, Marr said, “Time is short; eternity is long.”

Marr has served as the director of the National Institute for Newman Studies (NINS), based in Pittsburgh, Pennsylvania, since 2017. He has studied and written extensively about Newman, and he thinks many of Newman’s numerous Lenten sermons, delivered throughout his life, can provide a powerful basis for reflection during this season.

“For Newman,” Marr said, “many of the things we embrace during Lent were a part of his life all the time. For instance, the fasting, the self-denial aspect. He fasted every Wednesday and Friday, even before his conversion to Catholicism. It wasn’t asceticism just for the sake of asceticism sake.

“Sacrifice, self-denial, suffering were integral to his faith.”

Not all his suffering was self-imposed; much like what the coronavirus is putting the world through right now, he had no choice in some sacrifice. Newman endured numerous illnesses throughout his life. For instance, he contracted typhoid fever while in Sicily during a southern European trip in 1833. Marr said Newman saw his illness “as chastisement to curb his willfulness and desire to have his own way.”

Becoming Catholic didn’t clear a flat, smooth, easy path for him, either. Newman was a prominent Anglican priest and respected as a theologian nationally in England in the 19th century. His conversion to Catholicism in 1845 created quite a stir and made him the target of derision from members of the Church of England.

He eventually became a cardinal in the Catholic Church and was canonized in 2019.

Marr said Newman, while an Anglican, had a firm grounding in the theology of the Church Fathers but harbored “anti-Rome feelings.” That made his own conversion controversial among many of his colleagues and followers. “It was still a strong anti-Catholic time,” Marr said. “Not only did he give up his fellowship at Oxford when he became Catholic, he lost a lot of his friendships.”

What might Newman tell the world during the present crisis? Consider this selected passage from a longer Newman Lenten sermon, titled “Bodily Suffering,” from the recently published devotional The Tears of Christ. The book includes condensed versions of some sermons, with the language somewhat modernized.

In this particular one, even though Newman focuses on physical suffering, his words clearly can be applied to the sacrifices we all must face at times but are particularly poignant in light of the sacrifices much of the world is making during the current pandemic.

“Whoever does not bear his own cross and come after me, cannot be my disciple.” (Luke 14:27)

Accordingly, his apostles frequently remind us of this necessary, though mysterious, appointment, and bid us not to be “surprised at the fiery ordeal which comes upon you to prove you, as though something strange were happening to you. But rejoice insofar as you share Christ’s sufferings.” (1 Peter 4:12-13) St. Paul teaches the same lesson when he speaks of taking up the remnant of Christ’s sorrows as some precious mantle dropped from the Cross and wearing it for his sake. “I rejoice in my suffering for your sake, and in my flesh I complete what is lacking in Christ’s afflictions for the sake of his body, that is, the church.” (Colossians 1:24)

And though he is speaking especially of persecution and other sufferings borne in the cause of the Gospel, yet it is our great privilege, as Scripture tells us, that all pain and trouble borne in faith and patience will be accounted as marks of Christ, grace-tokens from the absent Savior, and will be accepted and rewarded for his sake at the last day. It declares generally, “When you pass through the waters I will be with you; and through the rivers, they shall not overwhelm you; when you walk through fire you shall not be burned, and the flame shall not consume you.” (Isaiah 43:2) “For this slight momentary affliction is preparing for us an eternal weight of glory beyond all comparison.” (2 Corinthians 4:17)

Let us, then, determine with cheerful hearts to sacrifice unto the Lord our God our comforts and pleasures, however innocent, when he calls for them, whether for the purposes of his Church or in his own inscrutable Providence. Let us lend to him a few short hours of present ease, and we shall receive our own with abundant interest in the day of his coming.

There is a treasury in heaven stored with such offerings as the natural man abhors, with sighs and tears, wounds and blood, torture and death. The martyrs first began the contribution, and we all may follow them. All of us, because every suffering, great or little, like the widow’s mite, be sacrificed in faith to him who sent it. Christ gave us the words of consecration: “Thy will be done.” (Matthew 6:10) Henceforth, as the apostle speaks, we may “rejoice in our sufferings” (Romans 5:3) as the seed of future glory.

Marr recommended three other of his favorite Lenten sermons by Newman for reading and reflection, with some thoughts Marr has shared in his blog at the NINS website.

“Life the Season of Repentance”

“In this sermon, Newman sets forth the Old Testament figure of Esau as a type for all persons who misuse the gifts of God. … So as to avoid the fate of Esau, Newman counsels Christians to enter with intentionality into the penitential practices that the Church commends to us, particularly during the forty days of Lent.”

“The Duty of Self-denial”

“This sermon commences with a bang: ‘Self-denial of some kind or other is involved, as is evident, in the very notion of renewal and holy obedience. To change our hearts is to learn to love things which we do not naturally love—to unlearn the love of this world.’ … Newman’s vision here is a proverbial bootcamp for training in holiness. Lent presents an excellent occasion for rededicating oneself to living out these practices.”

“The Yoke of Christ”

“Newman’s central contention in this sermon is that religion, by its very nature, is severe. The yoke of Christ can be intimidating to take on, because as humans we naturally fear the pain and struggle that accompany ‘yoke-bearing.’ The ‘payoff’ of taking up our cross is the freedom that it brings.”

NINS was co-founded in 2002 by Father Drew Morgan and Catharine Ryan, who were board members of what is now called the Newman Association of America. NINS is the largest curator of digital archives for Newman and the foremost center for Newman studies and research in North America.