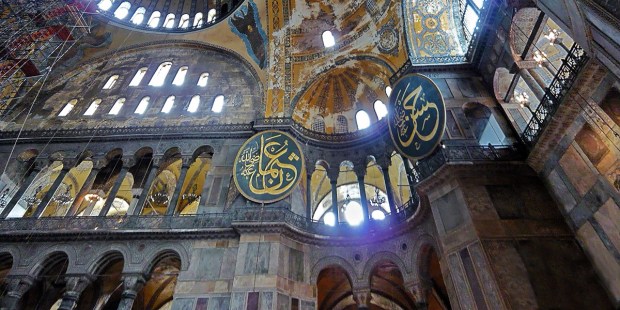 Patriarch Sahak II says it would be better to see visitors prostrating themselves “with respect and awe” rather than running around taking pictures.

The Armenian Patriarch of Constantinople has proposed that the Church of Hagia Sophia in Istanbul be shared by Christians and Muslims as a place of prayer.

Sahak Mashalian — Patriarch Sahak II — who in December 2019 was elected as patriarch of one of the four sees of the Armenian Apostolic Church, issued a series of tweets on his Twitter account Saturday calling for the common use of the former basilica, which has been a museum for the past 85 years.

“Hagia Sophia was founded by the labor of ten thousand workers, by spending a fortune,” said the beginning of Sahak’s thread, according to a Google translation supplied by Twitter of the original Turkish. “Numerous repairs of 1500 years, the efforts of the Fatih Sultan Foundation, all said that this temple was preserved as a place of worship. Not just a museum.”

He suggested that “instead of curious tourists rushing here and there to take pictures,” it would be more appropriate to create the conditions for people to “prostrate with respect and awe.”

The patriarch said that Hagia Sophia is large enough to accommodate both Christian and Muslim congregations. “Let the world applaud our religious peace and maturity,” he suggested. “Let Hagia Sophia turn into a symbol of peace of humanity.”

Sahak’s suggestion came in the wake of reports in Turkish media that the country’s president, Recep Tayyip Erdogan, had given instructions to change the status of Hagia Sophia so it can be used again as a place of Islamic worship, while continuing to admit tourists. Hürriyet Daily News reported June 5 that a plan to change the building’ status was examined by Erdogan at a meeting of the central executive committee of his Justice and Development Party, Fides, the Information Service of the Pontifical Mission Societies, reported.

Earlier, on May 29, Fides noted, the Turkish government decided to celebrate the 567th anniversary of the Ottoman conquest of Constantinople by having passages from the Quran read inside Hagia Sophia.

The U.S. Commission on International Religious Freedom, in its 2020 annual report, noted that throughout 2019, Erdogan “called multiple times” for the Hagia Sophia “to be converted back into a mosque.”

Built in the 6th century, Hagia Sophia was the seat of the Archbishop of Constantinople. In 1453, as the Greek Orthodox Constantinople fell to the invading Ottomans, the building was turned into a mosque. It remained so until 1935, when the government of Mustafa Kemal Atatürk, founder of modern Turkey and its first president, turned it into a museum.

Its Greek name translates as Holy Wisdom, referring to the Wisdom of God. Turks today refer to it as Ayasofya.

Sahak’s sharing proposal, while seeming to be a magnanimous gesture, could be regarded by Istanbul’s small Greek Orthodox community as somewhat misguided. Historically speaking, Hagia Sophia would be the Ecumenical Patriarch’s church. There did not appear to be a statement from the current holder of that office, Bartholomew I, regarding Sahak’s tweets, though he hasn’t found much success in trying to regain control over other properties.

As USCIRF noted, “Many longstanding issues concerning religious sites, such as the inability of the Greek Orthodox community to train clergy at the Halki Seminary, remained unresolved. In several instances in 2019, Armenian, Assyrian, and Greek religious and cultural sites, including numerous cemeteries, faced severe damage or destruction — in some cases because of neglect, but also due to vandalism or state-endorsed construction projects. … In November 2019, a Turkish higher court also issued a decision permitting the Chora (Kariye) Museum, a former Greek Orthodox church, to be converted back into a mosque—thereby possibly setting a precedent for the similar conversion of the Hagia Sophia.”

Sahak in his tweet thread asked rhetorically if his proposal is “too utopian,” but added:

“Aren’t we all doing our worship under the same sky dome? We can also share the dome of Hagia Sophia. Do we not believe in one God, even though our remarks are separate? I do not think that the temple, which has absorbed 1000 years of Christian prayers and 500 years of Muslim prayers on its walls and synthesized them in its mysterious existence, will have an objection to this.”

The 58-year-old patriarch urged readers to visit the venerable building. “Enter the temple, breathe silence and learn from it. Hagia Sophia will advise you that there was nothing more valuable than peace in the 1500-[year] history of humanity, where the temple of ‘Holy Wisdom’ was watched.

Sahak was born in Istanbul on March 17, 1962. He was elected after a long wait on the part of the Armenian Church of Istanbul, in part because Turkish authorities kept blocking the election. Sahak’s predecessor, Mesrob Mutafyan, suffered from dementia in the last years of his life, and the Church wanted to elected someone who could govern.

“After the passing of Armenian Patriarch Mesrob Mutafyan in March 2019, the Armenian Apostolic community undertook preparations to hold a long-sought election for the position of patriarch,” the U.S. commission on religious freedom said. “Patriarch Mutafyan had been unable to fulfill his duties since 2008 due to illness, leading the community beginning in 2010 to petition the Turkish government to hold elections for his replacement. The government blocked all attempts in the intervening years to hold an election, and it interfered again in September 2019 when the Interior Ministry introduced a new regulation barring the candidacies of any otherwise eligible individuals if they were serving abroad.”

This in spite of a May 2019 Constitutional Court ruling that prior acts of state interference had violated religious freedom, USCIRF said.

Just before Sahak’s statement regarding Hagia Sophia, an Areda Survey found that 73% of Turkish citizens favor transforming the building into a place for Muslim worship and prayer, Asia News reported June 12. Turkey is 99% Muslim.

The same article pointed out that the current government has granted other religions the opportunity to pray in buildings that had long been forbidden to worship and used as museums or places of culture. These include the Armenian church of Surp Giragos in Diyarbakır and the great synagogue of Edirne and the monastery of Aho in Gercüş.