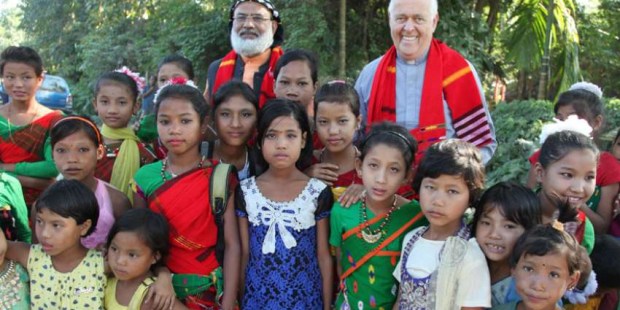 Not all of Kozar’s tenure has been marked by such sweetness and light, however. CNEWA has seen and responded to much suffering. It tends to go with the territory. Many times, the Churches of the East find themselves in areas of the world afflicted by war and natural disasters. There’s been severe drought in Ethiopia, misery in the Gaza Strip, war in Ukraine, flooding in India, and of course, the Islamic State’s rise and fall in Iraq and Syria.

“Despite all of that, these are truly people with amazing faith,” Kozar said. “I’ve been privileged. I think of some of the visits in Iraq, for example. People told me horrific stories: children seeing their father murdered by ISIS, their sister raped or taken away to be used as a sexual slave by ISIS or some other terrorist group. But their faith, that was very uplifting.”

Christians who lived on the Nineveh Plain in northern Iraq, for example, in many cases were targeted by the jihadists because they had a Christian cross in front of their homes.

“But the very same people who witnessed these horrible things — murder and rape and enslavement and pillaging of their property — these same people who are identified with the cross, when they made their way to [a refuge in] Kurdistan — and maybe they were in a field with tents — the first thing they did was paint a crude cross on the tent.”

A bull’s eye painted by an ignorant people? More likely, a self-reminder of the rich Christian heritage they share with generations of ancestors, stretching back to Apostolic times.

“There’s one symbol that supersedes and takes prominence over everything, and that’s the cross,” the American priest observed. “And it’s the victory of the cross. That’s how they’re really able to endure.”

Although Kozar acknowledges that the people CNEWA serves “know a lot more about being a Church than I’ll ever know,” the agency’s mandate is to represent the universal Church and the pope, offering a message of hope. But Kozar found that the people he visited, who live in such turmoil, uplifted him with their faith.

As he now prepares to retire, he’s been working with Msgr. Vaccari on CNEWA’s participation in Pope Francis’ campaign to rush assistance to those most affected by COVID-19. He emphasizes that CNEWA is not a humanitarian aid or crisis intervention agency, even though it does some of that. “However, when we do that, we should be doing it with pastoral hands.” He said that he and his successor are guiding the response based on two pillars: extreme hunger and the need for sanitary material and supplies, such as soap, disinfectant, and personal protective equipment.

Once again, he points to examples of local Churches CNEWA serves as sources of inspiration. He cites the work of Mar Barnabas, a Syro-Malankara Catholic Bishop in northern India, whom he calls “one of the great missionary bishops of the world.”

“He’s making masks with women to be given to thousands of people in villages and tribal areas,” the priest said. “He’s cooking food. There may be 1,000 people in a line, and it may be the only real meal they have that week. Those pastoral hands are distributing food. Those pastoral hands are making masks and providing them to people. Yes, it is a humanitarian action, but always in the context of a pastoral gesture. It’s the way Jesus the Good Shepherd would be serving his sheep.”

The setting is a far cry from Western Pennsylvania, where Msgr. Kozar will go home to retire. But it’s one of the stories he will take with him and share, he says, with seminarians, to maybe plant a seed and inspire young priests to consider missionary work.

“That’s why I’ve described myself — that pastoral part of me — I’m always a parish priest,” he said, adding, “There’s a half of me that’s a missionary. I find that they’re intimately wedded in my priesthood.”