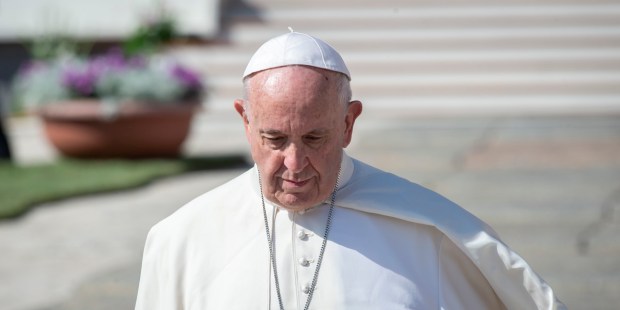 Consoles her about her husband’s loss of faith as he struggles with his grief.

“Such misfortunes should not happen,” Pope Francis told a grieving mom by telephone, regarding the car accident in which her son lost his life. The call was reported by the Italian website Vatican Insider on July 29. The pontiff contacted the Italian woman on July 26 after receiving a letter from her.

“Hello, Mrs. Cinzia? It’s Pope Francis …” The call came from an unknown private number that she had already seen pop up on the phone over the previous three days. When she finally answered, the mother of the young Fabrizio Di Bitetto—who died on October 5, 2019, in a road accident in Rome at the age of 21—at first thought it was a bad joke.

However, the pontiff immediately reassured her, saying, “Everyone thinks it’s a joke when I call.”

“The voice was his,” she said to the media.

Pope Francis assured her that he had her letter and the photo of her son in front of him. “How are you? And how is your husband?” asked the Bishop of Rome.

“We talked about Fabrizio and he told me that these misfortunes shouldn’t happen,” the Italian woman said. She explained how her faith “wavered” after the tragedy. “I poured out my sorrow on the Lord. I removed all the crucifixes, but I clung to the figure of the Blessed Mother, because she felt the same pain as I did.”

“It’s normal for this to happen.”

The woman also told the pope that her husband had lost his faith. “He comforted me by saying, ‘I understand. It is normal for this to happen.’ With the words of a father, he told me repeatedly that he understood my husband’s attitude without condemning him; on the contrary, he understood him, and accounted his attitude to the great sorrow he felt.”

At the end of the conversation, Pope Francis said he was open to her desire of meeting him in person “when it becomes possible.”

He assured her that he would pray for her whole family, and asked her to pray for him too, as he always does at the end of audiences or encounters.

“Pope Francis gave me joy,” she said, convinced that the phone call was a grace obtained for her by the intercession of her son.

Read more:
Yes, we will hug our loved ones again! Pope Francis explains what Christian hope really is