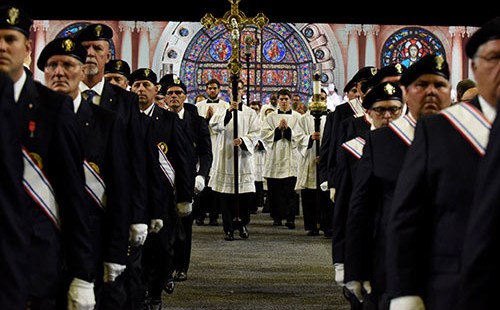 The pope’s message was delivered on the eve of the fraternal order’s virtual convention.

For the first time in its 138-year history, because of the ongoing coronavirus health crisis, the Knights of Columbus aren’t meeting in person for their annual convention. Instead, the 2020 event is being held virtually August 4-6, broadcast from the Knights’ headquarters in New Haven, Connecticut.

The convention is being held at a very special time for the Knights, who are celebrating the upcoming beatification of their founder, Venerable Father Michael McGivney.

To kick off the event, Pope Francis sent a message through a letter from Vatican Secretariat of State Archbishop Pietro Parolin, recognizing the contributions of the Knights, and their work building a “fraternal, just and equitable world.” His letter noted the convention’s theme, “Knights of Fraternity,” saying, “The theme of the Convention – Knights of Columbus: Knights of Fraternity – is a timely reminder of the vision that guided the foundation of your Order. … In these days, your Order has provided charitable support on the local, national and international level to individuals and communities suffering because of the pandemic or otherwise often forgotten or marginalized.”

The letter added that “His Holiness is grateful for these and for the many other countless ways in which the Knights of Columbus continue to bear prophetic witness to God’s dream for a more fraternal, just and equitable world in which all are recognized as neighbors and no one is left behind.”

Additionally, the papal message included the Holy Father’s appreciation for the Knights’ work on behalf of persecuted Christians, the unborn and all those are marginalized because of the pandemic or other circumstances, as well as his confidence that the beatification of Father McGivney “will be a stimulus for Knights to deepen their commitment to live as missionary disciples in charity, unity and fraternity.”