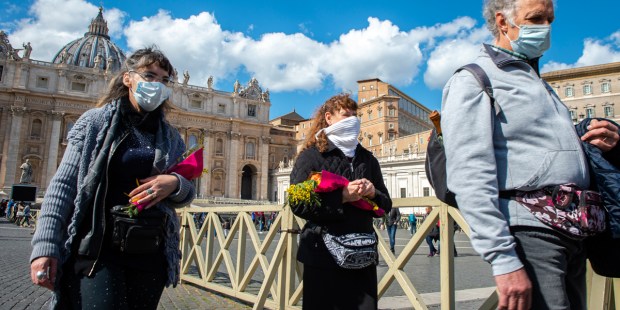 For first time since March, the weekly public event will be “public” again!

Pope Francis’ Wednesday general audience for September 2, 2020, will take place in the courtyard of San Damasco at the Apostolic Palace in the Vatican, the Vatican press office announced. This will be the first public general audience of the Sovereign Pontiff since the start of the health crisis in March 2020. Since the lockdown was put into effect, the weekly address has been live-streamed from the Apostolic Library.

The Prefecture of the Pontifical Household announced that as is customary, the event is open to all who wish to attend, and that it is not necessary to purchase tickets. However, the number of people allowed to enter will be limited to 500, in order to respect the sanitary measures in force, director of the Holy See Press Office Matteo Bruni told I.MEDIA.

The faithful will be admitted through the Bronze Gate starting at 7:30 a.m.

The courtyard of San Damaso is the courtyard of honor of the Apostolic Palace, and usually the place where heads of state and government and other officials who are received by the Supreme Pontiff are welcomed.

It is not the first time, however, that this place has been used by the head of the Catholic Church to preside over an audience: Pius XI, John Paul II, and more recently Francis himself—on June 8, 2019—have in fact received groups of pilgrims in the famous San Damaso courtyard, which adjoins the Apostolic Palace.