March for the Martyrs will bring attention to Christian persecution worldwide 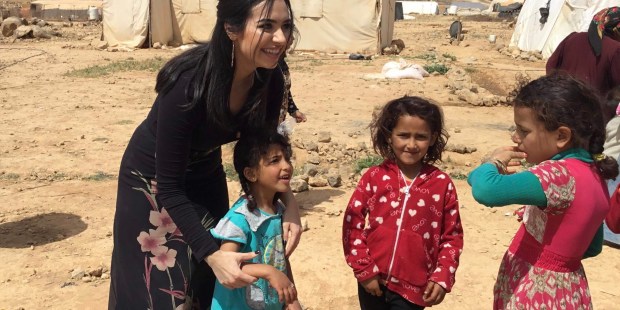 Gia Chacon was 20 and working in the cosmetics industry in southern California when she felt that something was missing in her life. She got in touch with her grandmother, Michelle Corral, who had been doing humanitarian work for some four decades, after her early experience in the Catholic Charismatic Renewal and meeting Mother Teresa.

“I felt that God was calling me to something greater, so I called my grandmother and asked her if she had any trips coming up,” Chacon said in an interview. “What I really wanted was a little retreat to try to figure out what my next step was going to be. But it was in Egypt, traveling with my grandmother, that I experienced the face of the persecuted Church for the first time. I realized that there are Christians suffering for their faith, and that these were not just the older generation, but people my age were willing to risk everything for their faith, willing to risk their lives to go to church, to serve Christ and live their lives for the Gospel.”

It was 2017, just a year after a deadly attack on a chapel next to Saint Mark’s Coptic Orthodox Cathedral, seat of the Coptic Orthodox Pope, in Cairo. Chacon’s visit, along with working with her grandmother’s organization, Chesed for Humanity, among Iraqi and Syrian refugees in Jordan, led her to make a commitment to “give my whole life to service of Christ.”

Eventually, Chacon founded her own organization, For the Martyrs, which seeks to raise awareness about persecution, advocate for religious freedom and provide aid to suffering Christians around the world. And on September 5, For the Martyrs will hold a rally and march in Long Beach, California, to call attention to Christian persecution around the world. Speakers include Christian musician and worship leader Sean Feucht; Juliana Taimoorazy, founder and president of the Iraqi Christian Relief Council; Corral, Chacon’s grandmother, who is also CEO and founder of Breath of the Spirit Ministries International, and others.

“Not only do we have instances of terrorism, but there is also systematic oppression, where Christians are seen as second-class citizens,” Chacon said.

“I’ve had the privilege of being in many closed nations around the world,” Feucht said in promotional material for the March for the Martyrs. “I’ve been able to be with them, hear their stories, hold the loved ones whose sons and daughters have been martyred for their faith, weep with them, and learn from them. Now is the time we are seeing Christian persecution skyrocketing around the world to levels like we’ve never seen before. We cannot turn a blind eye or a deaf ear to their cry. Now is the time, more than ever, to rise up and be advocates.”

The March for the Martyrs was originally scheduled for May but had to be postponed because of the COVID-19 pandemic. Now, Chacon says, there are no restrictions about how many people can gather outdoors. She said there are about 1,000 people registered so far, including representatives from Chaldean, Assyrian and Syriac Orthodox Churches in southern California, as well as “a lot of people who have a heart for this issue and really want to stand with Christians who are suffering for their faith.”

The event begins at 3:30 pm at Marina Green Park. The march will process through downtown Long Beach, across the bridge over the Los Angeles River, and end at The Reef on the Water, where a “Night of Prayer for the Persecuted” will be held.