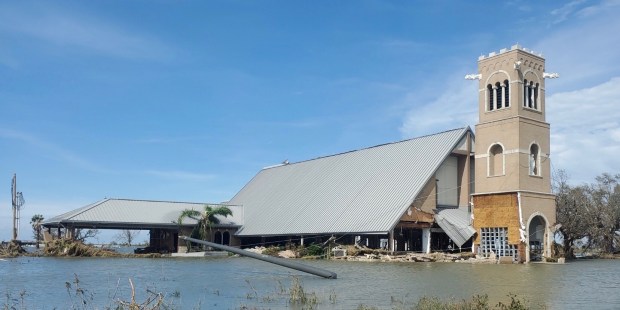 Catholic churches and rectories in the Diocese of Lake Charles, Louisiana, were “destroyed” by Hurricane Laura, the diocese reported.

The hurricane came ashore near the Louisiana-Texas border with winds up to 150 mph, making it one of the most powerful storms to strike Southwest Louisiana. It killed six people in the region and also caused a fire at a chemical plant in Lake Charles, sending acrid smoke into the sky.

“The entire five-parish region of the Diocese of Lake Charles was impacted by Hurricane Laura’s brutal wrath of destruction as the Category 4 storm made landfall along the Gulf Coast in the early morning hours of August 27,” said a report on the diocesan website.

The diocese said that nearly a third of the priests in active ministry in the diocese were displaced because of the storm, and only one of the six local Catholic schools can open in September.

The Cathedral of the Immaculate Conception, which underwent an extensive restoration project in 2019, was “heavily impacted with roof damage,” the diocese said. The roof of the chancery building caved in, forcing it to close indefinitely. In addition, all three homes for the Nigerian nuns of Daughters Mary Mother of Mercy are “uninhabitable.”

“The city is a disaster. No house, no business is left untouched,” said Bishop Glen John Provost. “We have 39 (church) parishes and seven missions. All suffered some damage.”

“Of the 39 church parishes, at least six suffered total destruction, while at least a dozen other churches are so highly compromised, said Bishop Provost, that it would be a major effort to rehabilitate them in order to have normal services going on,” according to the diocesan report.

North of Lake Charles, the Katharine Drexel Conference Center sustained roof damage when a number of trees fell on the building.

Catholic Charities of Southwest Louisiana responded to the situation as soon as it was safe to venture out.

“We are here, we are open and we are trying to meet the needs of the community,” said Sister Miriam Maclean, R.S.M., director.

The Knights of Columbus on Saturday announced it will donate $150,000 to the Diocese of Lake Charles.