The little-known epic of the Custody of the Holy Land 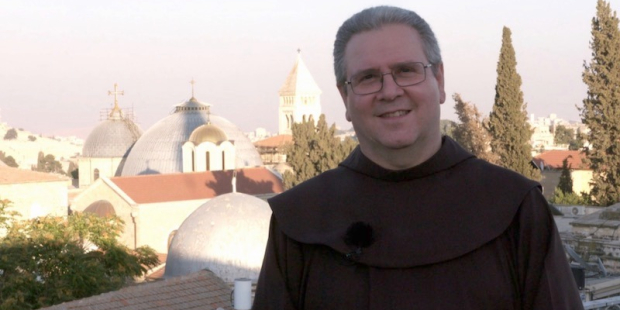 Custody of the Holy Land
Father Francesco Patton, custodian of the Franciscan presence in the Holy Land.
Share
Print
Lurdinha Nunes - published on 09/09/20

A conversation with Father Francesco Patton, custodian of the Franciscan presence in the Holy Land.

The holy places touched by Jesus would not be accessible today without the presence and dedication of entire generations of Franciscans who have offered their lives throughout eight centuries to guard and cultivate the Holy Land.

The origin of the Custody of the Holy Land dates back to 1217, when at the General Chapter of Pentecost, convoked by St. Francis of Assisi himself, the Franciscan order founded by him was organized into provinces. The province of the Holy Land — at that time called the “Overseas Province”– extended around the Mediterranean basin, from Egypt to Greece and beyond.

In 1219, St. Francis himself set sail from the Italian port of Ancona to visit the province of the Holy Land. The founder came as a messenger of peace during the Fifth Crusade. His arrival in Egypt gave him the opportunity to ask permission from the papal delegate to visit the Sultan of Egypt, Malek al-Kamel. That meeting became one of the most important moments in the history of dialogue between Christians and Muslims.

Eight hundred years later, the Custody of the Holy Land is now a province of the Order of Friars Minor, comprising Israel, the Palestinian Territories, Syria, Jordan, Lebanon, Cyprus and Rhodes, as well as some convents in Egypt, Italy, the United States and Argentina.

In this interview, which took place in the archives of the Custody, in Jerusalem, where the documents on the origins of the holy places are kept, Fr. Francesco Patton, Custos of the Holy Land, reveals to us little known elements of the work of the Franciscans  in the Land of Jesus.

Living in the Holy Land means living interreligious dialogue in an intense way. Are you inspired by the encounter between St. Francis and the Sultan?

In his instructions after his meeting with the Sultan, Francis warns: “do not provoke litigation or disputes.” At the same time he asks us to be at the service of all people with a clear Christian identity. This is the guide that has oriented us during these eight centuries.

In fact, in general, at the time of the Fifth Crusade, the relationship between Christians and Muslims was not one of encounter, but of conflict. And yet, Francis lived this encounter and proposed this style that is still fully relevant today.

This is demonstrated by the fact that just last year Pope Francis, together with the Imam of Al-Zhar, signed in Abu Dhabi the well-known document dedicated to the brotherhood of peoples in the service of peace.

The relationship between Christians of different confessions—ecumenical dialogue—constitutes another of the challenges that the Franciscans in the Holy Land face. In the past, this dialogue has passed through difficult moments. How are these relationships today?

Father Francesco: At present, relations with other Christian communities are very good. We see this both at the Holy Sepulchre and on other occasions in our ordinary life.

But beyond these concrete agreements between the heads of the ecclesial communities, there’s collaboration in the broadest sense: for example, we share our problems and make decisions together, when one or another community is facing a problem that must be dealt with in a spirit of solidarity.

The Franciscans today are the custodians of eighty sanctuaries that we can define as “the shrines of our redemption.” In what does this “custodianship” consist? What is it like for the shrines during these moments, when after years of exponential growth of pilgrims, they now find themselves empty because of the coronavirus?

Father Francesco: These are particular moments in history: not long ago the Custody also experienced very difficult moments. For example, during the first and second Intifada the pilgrims stopped coming, but we are still present in the shrines.

We must remember the mandate left to us by Pope Clement VI, who in 1342 asked us to dwell in the shrines; then comes the welcoming of pilgrims.

Our presence in the shrines, even when they are empty and there are no pilgrims, means to dwell in those places where God revealed himself, where Jesus Christ accomplished our redemption, the places where he was born, preached, performed miracles and gave up his life for us …

The education of new generations of Christians in the territory is one of the fields to which the Custody of the Holy Land pays the greatest attention. This activity is carried out through 15 schools in five countries, attended by 11,000 students and 1,100 teachers. What are these schools like?

Father Francesco: Many of our students are Muslims, and we manage to share, to live together in harmony.

We share the religion class with Christians of different confessions. It is a Christian religion class; that is, it offers an ecumenical perspective, in which you also learn to know the differences and particularities of each of the churches.

We have the “Magnificat” music school, which welcomes Jewish, Muslim and Christian students. It helps us to understand the value not only of education in general, but of art in particular: through music, dialogue is created. It’s what John Paul II called “the path of beauty,” the path of art. Through this path one comes to share values, to create something very beautiful together.

The Custody of the Holy Land offers more than 582 houses in Jerusalem and 72 houses in Bethlehem, providing a home for some 2,050 people.

In the middle of the last century, the Custody of the Holy Land offered “bread and oil” in its parishes as a daily help; today the population needs a roof over their heads to be able to live a dignified life. This is the way to be at the side of the poorest and to maintain the Christian presence in the Holy Land.

Another important figure of the Custody is represented by the commissioners of the Holy Land, who are present throughout the world. What is their mission?

Father Francesco: The mission of the commissioners is very important for us: they are like the ambassadors of the Custody of the Holy Land in different countries. They are Franciscan Friars Minor (of the Custody or of the local provinces) who are committed to working towards several objectives. The first is to make the Holy Land known; therefore, they share our magazine, they spread our message, and they make known the work of our Christian Media Center, our multimedia production center.

They also work for a second very important objective: to encourage and accompany pilgrimages. Many commissioners organize groups of pilgrims from different countries of the world, and accompany them here so that the pilgrimage becomes an authentic experience of faith, prayer, and Christian growth.

Finally, they strive to achieve a decisive objective: to support the Custody of the Holy Land financially. They do this through promoting the collection for the Holy Land, which generally takes place on Good Friday, although due to the coronavirus this year it will be on September 13. They also work to find resources through contact with benefactors and people who love the Holy Land.