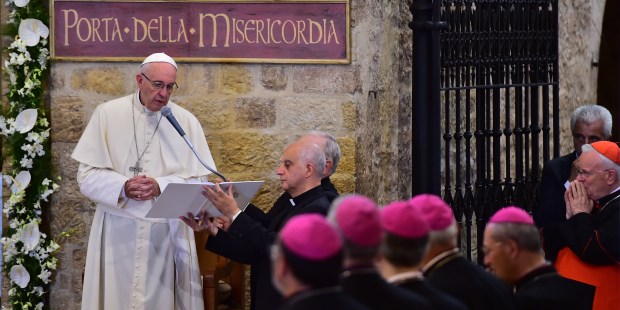 AFP
Pope Francis travelled to the Italian town of Assisi on August 4 for a private visit to mark the 800th anniversary of the 'Pardon of Assisi', under which the slates of sinners can be wiped clean. The 79-year-old pope arrived by helicopter in the hill-town in central Italy where his namesake Saint Francis of Assisi was born and found God, renouncing his wealth for a life of poverty and becoming an emissary of peace during the Crusades. / AFP PHOTO / GIUSEPPE CACACE
Share
Print
I.Media for Aleteia - published on 09/11/20

How will St. Francis’ text be rendered in English, to serve as an invitation to think of the human family as sons and daughters of the same Creator?

The title of the upcoming encyclical from Pope Francis — Tutti Fratelli — and the fact that he will sign it in Assisi on the vigil of the feast of St. Francis of Assisi — “already says a lot” about its contents, Pietro Messa, dean of the Higher School of Medieval and Franciscan Studies of the Pontifical University Antonianum, told I.MEDIA.

The Franciscan scholar, as well as other specialists, believe that this phrase, which means literally “all brothers,” is taken from St. Francis’ 6th Admonition.

Let all of us, brothers, look to the Good Shepherd Who suffered the passion of the Cross to save his sheep. The sheep of the Lord followed him in tribulation and persecution, in insult and hunger, in infirmity and temptation, and in everything else and they have received everlasting life from the Lord because of these things. Therefore, it is a great shame for us, servants of God, that while the saints [actually] did such things, we wish to receive glory and honor by [merely] recounting their deeds.

The title, however, will be tricky to translate into English.

“Tutti fratelli” should be a call to recognize humanity as a great family — we are all brothers and sisters, sons and daughters of the one Creator.

Sister Bernadette Reis, a journalist with Vatican News, says the rendering of the phrase in English is causing some debate. “The problem is that in the English-speaking world, the word brother refers specifically to the masculine; it does not have the same meaning as in Latin languages.”

Yet, since this title is taken from a translation of St. Francis, it is also difficult to modify it, the nun points out. And St. Francis was speaking to his brothers – men – and not to a mixed audience.

For the time being, the official translation of the title of the encyclical in English has not been provided by the Vatican, she explained.

In the end, perhaps the document will be generally referred to with its Italian title. The titles of Church documents are generally the first words or phrase of the text. And oftentimes, they are most commonly remembered in Latin. One can think, for example, of John Paul II’s famous Evangelium Vitae (The Gospel of Life) or Benedict XVI’s Deus Caritas Est (God is Love).

In his 6th Admonition, St. Francis is recalling to his brothers the martyrdom of five of them, who died in Morocco in 1220 while they had gone to preach the Gospel. He is urging his young community not to merely boast of this sacrifice linked to their fraternity, but instead to be steadfast in the goal of their own holiness.

As with Francis’ second encyclical Laudato si’, the pontiff chooses to draw from the writings of his namesake saint.

Laudato si’ can be translated as “Be Praised” or “Praised Be.” It is taken from a popular prayer of St. Francis of Assisi, praising God for creation.

And St. Francis is, in a way, the patron saint of the themes for both Francis’ second and third encyclical.

The saint of Assisi, notes Pietro Messa, is at the same time the “guardian of Creation” and the man who met Sultan Malik Al-Kamil in 1219.

It is expected that this third encyclical will develop themes from the jointly-signed “Document on Human Fraternity for World Peace and Living Together” presented by Pope Francis and the Grand Imam of Al-Azhar Ahmed Al-Tayyeb on February 4, 2019.

This gesture by the current pope echoed the peaceful meeting of St. Francis of Assisi and Sultan Malik Al-Kamil in Egypt in 1219.

So Francis will deliver his message of human fraternity at the tomb of this great saint, on the vigil of his feast.

Read more:
Every disabled person is a unique contribution to the common good, says pope