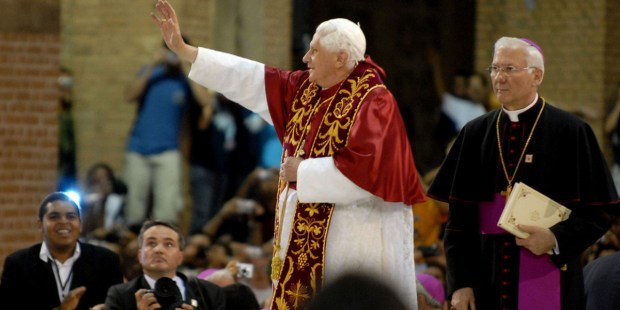 Pope Emeritus Benedict XVI has at least five important qualities or gifts that ensures that he continues to be an important voice in Catholic thought, said a theologian who was awarded a prize named for the German pontiff and theologian.

“I would say that he really understands Western culture,” said Tracey Rowland, one of two recipients for this year’s Ratzinger Prize for theology. The other recipient is French philosopher and Catholic theologian Jean-Luc Marion, a professor at the University of Chicago Divinity School and a member of the Pontifical Council for Culture. Marion, a former student of the 20th-century philosopher Jacques Derrida, is a member of the Académie française, and is associated with the idea of “saturated phenomena,” according to Catholic News Agency.

Rowland, professor of theology at the University of Notre Dame Australia, said that Benedict’s “understanding of secularism and cultural Marxism is deep. He can therefore write in such a way that young people reading him feel as though he understands the pathologies of the culture into which they have been born.”

The pope emeritus, whose latest book was From the Depths of Our Hearts: Priesthood, Celibacy and the Crisis of the Catholic Church (Ignatius, 2020), provides the “back-story” in his writings, explaining “the moves on the chessboard of the European intelligentsia that got western culture into its current mess and he gives them the remedies, the intellectual antidotes,” Rowland said in an interview with the Australian Catholic Weekly.

Pope Francis announced the award recipients October 1. The prize, which began in 2010, is awarded in three areas: the study of sacred Scripture, patristics and theology. Rowland and Marrion will receive the award in a November 14 ceremony.

Rowland said she suspects that her interest in culture attracted the attention of the awards committee. “At the conferral ceremony in November I expect that some reference will be made to my contributions to the theology of culture. Cardinal [Gianfranco] Ravasi was on the selection committee and he is very interested in this subject,” she said. “I also gave a lecture at Santa Croce University [in Rome] last November on Ratzinger/Benedict’s ideas on the theology of culture and the auditorium was filled to capacity. It is possible that someone on the selection committee or closely associated with the committee was present at that lecture.”

She said that in addition to the theology of culture, her interests include theological anthropology (nature and grace, intellect, memory and will, faith and reason and the imagination, history and ontology), and fundamental theology (the building blocks of the Catholic intellectual tradition).

She is now working on a book, Illuminating Hope: Defenders of Christian Humanism after Kant and Nietzsche, about the ideas of six German Catholic scholars who stood up to the Nazis: Carl Muth, Theodor Haecker, Theodor Steinbuchel, Gottlieb Sohngen, Romano Guardini and Erich Przywara.

“They were the intellectual heroes of the Ratzinger generation of German seminarians,” she told the Australian newspaper. She is also working on a “Ratzinger Lexicon,” which will contain 101 short essays, “each on a single aspect of the theology of Joseph Ratzinger/Benedict XVI.”

In addition to Benedict’s expertise on Western culture, Rowland said he stands out in a number of other ways: