After their monastery was destroyed, they set to work to rebuild. And they were not deterred when disaster struck again.

In the run-down church of San Damiano, near Assisi, St. Francis heard Christ speak to him from the crucifix: “Francis, Francis, go and rebuild my house, which you see is falling into ruin.” He responded by promptly selling cloth from his father’s warehouse in order to rebuild the church.

Some eight centuries later, his followers are still hearing these same words and rebuilding — this time due to earthquakes.

The first one hit at 3:40 in the morning on August 24, 2016, while people were sleeping soundly in their apartments and villas all across the peninsula from the Adriatic to the Tyrrhenian Seas.

News media said the magnitude was 6.1. The epicenter was near Rieti, the geographical center of Italy, though there was damage in four regions: Umbria, Lazio, Abruzzo, and the Marches. There was tremendous loss of life and property, reporters said.

Soon images of towns razed to the ground were shown on TV and social media. The names of mountain villages never before heard were suddenly household words: Amatrice, Accumoli, Pescara del Tronto.

Initially the death toll was just two. Then it climbed to six, then ten, then 20. Eventually, after rescue missions were called off and the missing were accounted for, it was confirmed that 299 people had died. Another 365 were injured while approximately 2,100 lost their homes. It was a national tragedy.

After things settled down somewhat, on Sunday morning at 7:30 a.m., October 30, it happened again. It was the big one. This second quake was a 6.6 and the epicenter was near Norcia. By grace, no one was killed. Damage from the previous quake had already forced people out of their homes in the affected areas. Yet countless more lost their homes.

Hotels all across Italy took in those who were affected – terremotati they were called (the “earthquaked”). The pain in their faces was unmistakable as these people lost their homes, jobs, livelihoods, and communities.

In 2004, the sisters returned to Camerino to rebuild. The monastery was important to the order as it was founded by Blessed Camilla Battista Varano, a Renaissance-era Poor Clare nun whose cause was for canonization underway.

After six years raising funds and rebuilding, the sisters were overjoyed when their church was finally reconsecrated. It was 2010, the same year Camilla Battista Varano was canonized by Pope Benedict XVI.

The Poor Clares are victims again

Six years later, the 2016 earthquakes caused even greater damage. Once again, the demoralized sisters were forced to return to San Severino.

Yet the Poor Clare monastery in San Severino also suffered damage, especially to the dormitory. Fortunately, they narrowly avoided having their monastery declared uninhabitable and closed. The 26 sisters were permitted to stay, but they were forced to take up quarters in the guest house and in the speaking parlor, two to a room. Though grateful no one was injured, their way of life was seriously affected.

Though the nuns live according to a rule based on poverty, their faith did not eliminate anxieties for their future. Like the laity, the sisters, too, were forced to reckon with suffering regarding which there are no easy answers.

The power of faith

As the months and years wore on, a question from the Book of Ezekiel reverberated among them: “Can these bones come back to life?” (Ezekiel 37:3). They asked themselves if the ruins of their cities of Camerino and San Severino would ever come back to life.

Ultimately, the answer was also found in Ezekiel’s word. That word was “spirit”:

I will put my spirit in you that you may come to life, and I will settle you in your land. Then you shall know that I am the LORD. I have spoken; I will do it—oracle of the LORD (37:14).

Armed with faith and determination, the Camerino sisters forged ahead. They were able to raise funds to build a smaller wooden church and monastery in their courtyard, which was consecrated in 2018. They have returned home and resumed their lives. They are the only religious community in Camerino that has reestablished a presence in the city.

In San Severino, the sisters rebuilt the novitiate. This has created more rooms and allowed them to return to some semblance of their life. Providentially, just after they reopened the novitiate, two young novices made their simple vows.

Despite everything, the Poor Clare sisters continue to radiate joy as they always have. They have been a beacon of faith and hope to the community. They have embodied the words written by St. Clare herself:

For the Lord Himself has placed us as a model, as an example and mirror not only for others, but also for our sisters whom the Lord has called to our way of life as well, that they in turn might be a mirror and example to those living in the world. Since the Lord has called us to such great things that those who are a mirror and example to others may be reflected in us, we are greatly bound to bless and praise God and to be strengthened more and more to do good in the Lord. Therefore, if we live according to the form [of life] mentioned above, we shall leave others a noble example and gain, with very little effort, the prize of eternal happiness. (Testament 19-23) 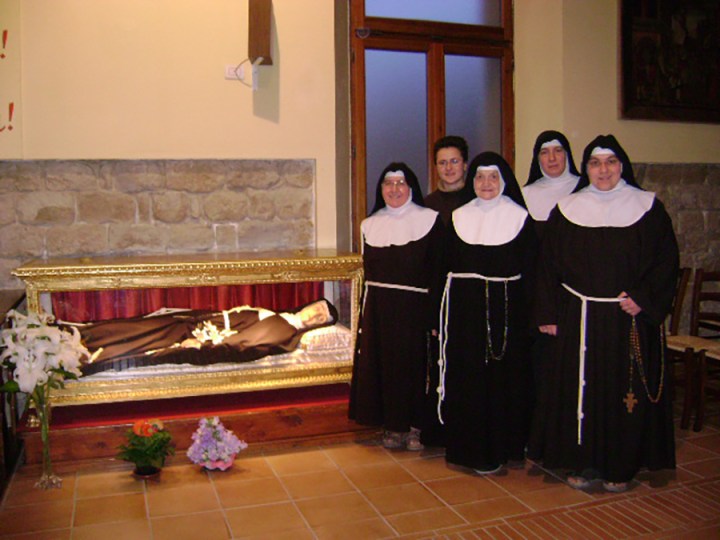