What happens to a woman’s brain when she becomes pregnant?

It's easy to see how a pregnant woman's body changes physically, but what's happening mentally is also extraordinary.

If the physical transformations in pregnant women are obvious, it’s not hard to imagine that a great upheaval is also taking place at the mental and psychological level. What actually happens to a woman’s brain during pregnancy?

In Haiti, women say that they are expecting a baby for 18 months: the nine months of pregnancy, and the nine months preceding the pregnancy. They’re including the time during which they were hoping to have their child. Generally speaking, women prepare themselves psychologically to have a child even before they’re pregnant. They imagine their baby, their new life, and the life changes that result from it.

Many of the changes that pregnancy brings are well known: mood swings, fatigue, hypersensitivity. They “reflect the adaptability of the brain, which has to cope with the enormous stress caused by the hormonal tsunami of pregnancy,” says Stefania Maccari, a neurobiologist at the Behavioural Neurosciences Laboratory in Lille, in an article in French periodical Le Figaro.

Indeed, thanks to MRI (magnetic resonance imaging), researchers at the University of Barcelona have found that pregnancy leads to changes in the size and structure of the brain’s gray matter, especially “in areas associated with social skills, such as the perception and interpretation of the desires, emotions, intentions and moods of others or oneself.”

Read more:
Why you shouldn’t be ashamed of having “pregnancy brain”

The brain prepares itself for maternal behavior

“This is the process of maternal nesting,” says Delphine Babic, head of life education at the Catholic University of Lyon and a specialist in the mother-child bond. A pregnant woman prepares both a physical home, in her body, and a psychological one, in her mind. The mother-to-be reviews her memories of her own history. She sorts out what she has received and what she wishes to pass on to her child. Memories resurface, which can be more or less joyful, and which sometimes influence mood swings.

As for the fatigue experienced by pregnant women, it’s not only due to changes in their body. The human body has a body memory stored in the unconscious. Subconsciously, we remember, for example, the way in which we were cuddled or stimulated, and the way in which we were spoken to as little children. For Delphine Babic, “a pregnant woman performs a kind of narcissistic withdrawal; she dreams, and her memories come back.” This is one of many sources of the immense tiredness some women experience at the beginning of pregnancy.

To carry out this process of remembering and preparing, pregnant women need to understand their own past. They often ask their own parents and relatives questions, and leaf through photo albums. In this period, they remember some things from their own childhood that they want to replicate for their own child, and others they hope to avoid. Delphine, for example, remembers the good times she shared with her grandmother when they baked cakes together. She would like to do the same with her child.

“All this work” by pregnant women, “helped by interaction with those close to them, brings psychological transparency,” says Delphine Babic. She particularly recommends working with a therapist if painful memories reappear, because the baby can be affected by the mother’s negative emotions.

Pregnant women are often unusually sensitive. They are more vulnerable to their environment and to the people around them. It’s difficult for them to deal with conflict. Therefore, they need to be surrounded by positive words that help them to think confidently about their baby and their pregnancy. 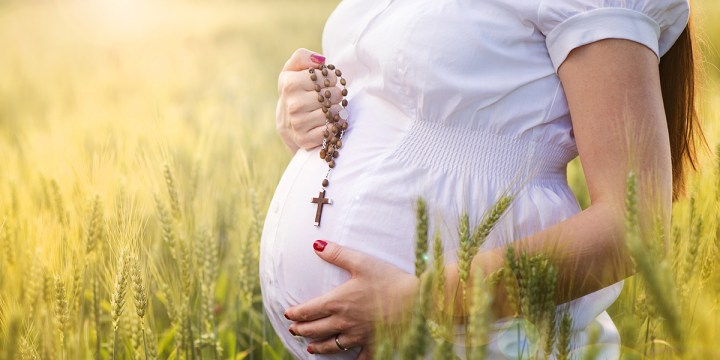 Prayer for this evening
Top 10
1
Larry Peterson
This is the only officially recognized Marian apparition in the U...
2
Philip Kosloski
A scientist describes the Miracle of the Sun at Fatima
3
Cerith Gardiner
Nightbirde finds inspiration in Joan of Arc
4
Cerith Gardiner
Archbishop gives little girl a beautiful response about why God a...
5
Agnès Pinard Legry
Three brothers ordained priests on the same day in the Philippine...
6
Philip Kosloski
Vatican II’s primary goal, according to St. John XXIII
7
Philip Kosloski
Pope Pius XII witnessed the Fatima “miracle of the sun” while wal...
See More
Newsletter
Get Aleteia delivered to your inbox. Subscribe here.