It’s not the first large-scale LEGO re-creation of St. Peter’s (a Pennsylvania priest built a larger-scaled half-million piece LEGO St. Peter’s ahead of the 2015 U.S. Papal Visit). Buttliere may be the first, however, to build the entire city-state entirely from LEGO.

It took him more than 500 hours over 70 days to dream, design and create the model.  Assembling the tiny Vatican City took another 300-plus hours over 28 days.

Buttliere’s 1-to-650 scale replica of Vatican City, revered as the center of the Catholic Church and for its influential architecture, is built from more than 67,000 LEGO parts, with some 1,300 unique individual pieces.

The sprawling landscape, which features many aspects of the pilgrimage city, is roughly 24.5 square feet (4.3 feet by 5.6 ft or 1.3 meters by 1.7 meters) of LEGO, and could fit on a standard ping pong table.

Buttliere said the incredible heritage of the Vatican City inspired him to create the entire country out of LEGO. Though the Vatican wasn’t his first religious build (he built Paris’s Notre Dame the day after the devastating 2018 fire), it’s the first time he had ever built an entire country. 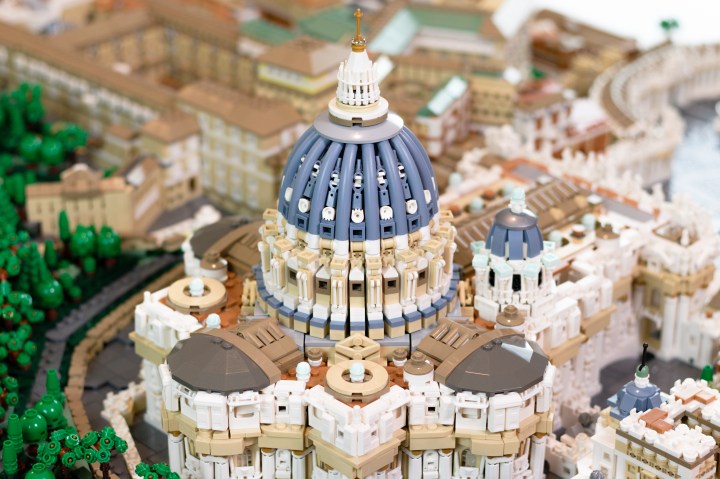 Creating the Vatican’s neighbor helped get the ball rolling to construct the Vatican, Buttliere said.

A trip to Rome and the Vatican City showed him the dizzying history and architecture and culture spread throughout the region. That trip happened in November 2019, just three months before the COVID-19 pandemic upended the world.

In non-pandemic times, Buttliere usually travels to different LEGO expos around the world, showcasing his massive constructions of world landmarks and landscapes. But when plans changed in March 2020, and the world locked down, he shifted his timeline and started working on the Vatican.

Using computer-aided design programs, 3D models, satellite imagery and historical references, Buttiliere began piecing together the Vatican. And since the Vatican consists of hundreds of unique buildings built over thousands of years, Buttliere said the creation speaks to that length of time.

The varying designs of the Vatican, its oval colonnade and intricate stonework and radiating lines, the sloping gardens and buildings, a myriad of the diverse interests of the Vatican, all required a special creativity necessary to match such architecture with LEGO elements.

“You just have to get creative with the parts,” he said. “Something rectangular or square is harder to re-create than a dome.”

Even after building some 50-plus models, Buttliere said he used many parts he’d never used before.

“It’s always a learning process, not just a cursory endeavor; every aspect was completely different,” he said.

So he began with St. Peter’s Basilica and Square, which he said spoke to its “iconic nature” as the centerpiece of the landscape. His replica of the famous dome features dinosaur tails and dozens of other unique elements. The Paul VI Audience Hall, where Pope Francis often hosts his general audiences under its wave-like roof, features on its wall a Gungan shield from LEGO’s Star Wars collection. A dark red tile denotes the papal window at the Apostolic Palace where the pope leads the Angelus. Tiny white mini-figures stand atop Bernini’s colonnade, a LEGO version of the “the maternal arms of Mother Church.”

Despite these creative challenges, Buttliere said it was enjoyable at every turn. From the buildings, gardens and the fountains, Buttliere welcomed the creative and aesthetic freedom in recreating with LEGO a sloping hillside in the Vatican Gardens, the first Baroque piece in his body of work. The large landscape can be transported by coming apart in eight stages with 15 individual sub-sections.

And with 10 years’ experience in creating complicated architectural models, Buttliere has narrowed his focus to landmarks. He started with individual landmarks, like skyscrapers, urban buildings and statues like Brazil’s Cristo Redentor or the Burj Khalifa in Dubai. Soon the builds grew horizontal, growing in width and complexity, with landscapes featuring the Mount Rushmore National Memorial in the U.S., the London Eye and Westminster Abbey and the Chinese Forbidden City.

Buttliere said he wanted to “express these noteworthy landmarks in their broader context and their landscape.” Each of his LEGO constructions is separate in time, style and geography, but all can be brought together under one roof with a design philosophy of landmarks shown within their landscapes, he said.

Buttliere said he enjoys the educational aspect of his work. Many people recognize landmarks, but far fewer have been able to see them in person.

“You get to share it with the kids and families who come to the shows,” he said. “It’s meaningful to speak to the broader history and landscapes of these landmarks.”

Buttliere hopes that viewers of the mini Vatican City gain a newfound appreciation and respect and understand that the Vatican City isn’t exclusively just for one specific faith or group of people: it’s a shared cultural heritage that all can enjoy.

Using LEGO, Buttliere hopes to inspire people by using the humble brick’s common thread: everyone worldwide knows a LEGO brick and has a memory tied to a LEGO set.

Despite the fun in meeting people, he said it’s equally or more rewarding when viewers notice pieces in his landscapes that they themselves had as a kid.

“It transcends the subject meaning of the landmark with a connection to a childhood memory,” he said “and those parts suddenly have a meaning beyond what it means to” the builder but to the viewer, too.

Buttliere said that like many people he was always building as a kid, the only difference is that he never stopped. After graduating with an architecture degree from the Illinois Institute of Technology in Chicago in 2017, he then pursued LEGO full-time. His commissioned works have been featured in museums and exhibitions around the world.

Though he was quiet about his next project, Buttliere promised his upcoming construction will be equally as historic.

“I’m not planning on stopping anytime soon,” he said.

To learn more about Rocco Buttliere, visit his website.

View a video about the LEGO landscape below: