Virtually visit the Basilica of Santa Prassede, where the Passion ends in glory

Station Church Day 40: Here we can pray with the pillar to which Christ was tied for the flagellation.

Holy Monday takes us to the Basilica of Santa Prassede. Here the Passion—recounted in the frescoes, and evoked by the Pillar of the Scourging and by the many relics of martyrs entombed here—is already illuminated by the light of Easter that shines in the mosaics.

The “titulus Praxedis” dates back to the 5th century, but it was not until the 9th century that Pope Paschal I built the first basilica. It is said that 2,300 martyrs of the 2nd-century persecutions are buried here. In the central nave there is a red porphyry disk: On this spot, according to tradition, stood a well in which Praxedes and her sister Pudentiana collected the blood of the martyrs. The basilica also houses the “Holy Pillar”: It is said that Jesus was bound to it when he was scourged.

One’s gaze rises from the memories of the Passion to the final triumph. The mosaics of the apse (9th century) show Christ in his second coming. In the apsidal and triumphal arches the iconography follows St. John’s vision described in the Book of Revelation: the Lamb seated on the throne, the Book of the Seven Seals, and the Heavenly Jerusalem.

Another piece of Paradise is the chapel of St. Zenon. A special indulgence is linked to this altar: It’s possible to free a soul from Purgatory after five Masses. Paschal I established this as a result of a vision: While celebrating a Mass here in suffrage of a nephew, he saw his soul being taken to heaven by Our Lady. 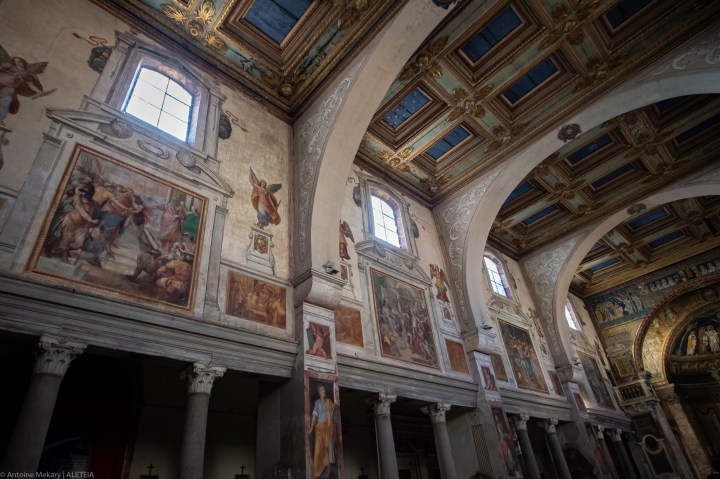 Read more:
In praise of Purgatory: 4 Points to ponder about your hour of death