Virtually visit the “resurrection” of St. Paul Outside the Walls

Station Church Day 48: The pope was ill and wasn't told of the fire that destroyed the basilica.

At one time, a speech by Paul from the Acts of the Apostles was read on the Tuesday after Easter. That’s why today the station church is St. Paul Outside the Walls.

The present building was erected after the fire of 1823, but it faithfully reflects the structure of the Constantinian basilica. The fire that destroyed the ancient basilica occurred on the night between July 15 and 16, 1823, probably due to the carelessness of some workers who were working on the roof of the basilica: a coal was probably left burning, which started the fire during the night.

The news immediately went around Rome. Only one person remained in the dark: the pope. Pius VII was seriously ill, and was not informed. He died a month later without ever having heard anything about the fire.

The reconstruction of the basilica was begun by Leo XII. For the undertaking, the pope appealed to the generosity of the faithful: in the encyclical “Ad plurimas” he invited everyone to donate according to their possibilities to help support the rebuilding. This invitation was also accepted by many heads of state, including Tsar Nicholas I.

Repent and be baptizedevery one of youin the name of Jesus Christ…Acts 2:38 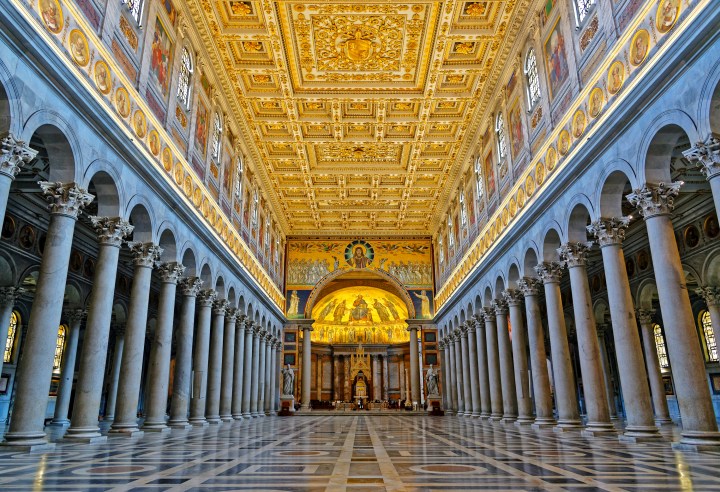 Prayer for this evening
Top 10
1
Philip Kosloski
A scientist describes the Miracle of the Sun at Fatima
2
Agnès Pinard Legry
Three brothers ordained priests on the same day in the Philippine...
3
Cerith Gardiner
Archbishop gives little girl a beautiful response about why God a...
4
Zoe Romanowsky
How to love people you don’t really like
5
Margaret Rose Realy, Obl.OSB
The ‘Tree of Death’ haunts many a cemetery
6
Philip Kosloski
How the violence in ‘Squid Game’ can impact your soul
7
Larry Peterson
This is the only officially recognized Marian apparition in the U...
See More
Newsletter
Get Aleteia delivered to your inbox. Subscribe here.