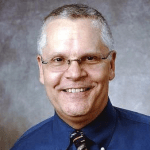 Deacon Greg Kandra is a Roman Catholic deacon in the Diocese of Brooklyn, New York. For nearly three decades, he was a writer and producer for CBS News, where he contributed to a variety of programs and was honored with every major award in broadcasting. Deacon Greg now serves as Multimedia Editor for Catholic Near East Welfare Association (CNEWA.) He and his wife live in Forest Hills, New York.

‘A simple casket for a simple man’: the plywood casket of Billy Graham, made by Louisiana inmates

Taking a stand: Catholics arrested in D.C. during protest for Dreamers

Have altar, will travel: check out these beautiful portable altars

On the move: “The Deacon’s Bench” returns to Patheos March 1