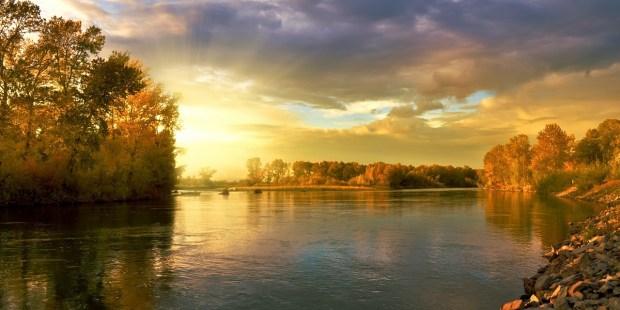 Share
Print
Tod Worner - published on 05/28/17
Recently I was leafing through stacks of old magazines and journals I wanted (nay, my wife asked me) to purge. As an inveterate packrat, I become very uncomfortable tossing out these unexplored treasures. After all, I should at least peruse them one last time in case I find that one essay I don’t want to miss.

And so, making my way through a pile of First Things journals, I made a promise to myself. Tear out and keep everything written by Brian Doyle.

Several years ago, I came across Brian Doyle quite by accident. Perusing essays in The American Scholar, a curious title caught my eye. Over the Bar in the River.

In three simple paragraphs, Brian told the story of his last words with a dying friend. In three paragraphs, came a friend’s admission that he wasn’t afraid of death (Nah, was how he put it) and that he was ready.

I had a great run, a woman I loved dearly, eight kids, lots of grandkids, good work, good friends, fought a cruel empire, saw a lot of the world. Nah, I am not scared. I am sad that a lot of great stories will die with me, though—some of them true.

Oh, when I was a kid in Montana, this was in Butte, the most Irish town in America then, one of my jobs was to take the bucket to the pub and get it filled with beer for my dad. He’s back home from the mines for dinner and he’s bathing out back and when he finishes wiping off, there I am with the bucket of beer, and he takes a dipper and has a taste, and he says, Thank you, son. We would stand there a moment, you know, waiting for nothing, just savoring the moment. We didn’t get many moments like that. He worked awful hard, and there were a lot of us kids. That was called rushing the growler. The growler was the bucket, see? He’d stand there three minutes, maybe, sipping and smiling at me, and it felt like all the time in the world. That was a good time. That was a great time. I sure liked my dad. He sure was a good dad.

Finally, Brian cherished “the very last words I heard from lips that had told me a thousand stories—some of them true.” His friend murmured, “I’ll see you over the bar in the river.” And Brian wept.

In three short paragraphs, I was in tears thanks to an author I never knew. His words weren’t profound (in the way the world haughtily demands profundity). They were holy. And human. Enough to make us feel likes boys again with our fathers. Enough to make us thankful for our story-telling friends. Enough to make us weep at a cryptic phrase that says it all.

This was Brian Doyle’s charism.

When I found a poem of Brian’s in a First Things journal (dated October, 2015) titled RULES FOR BEING AN ALTAR BOY AT SAINT JOHN VIANNEY PARISH FOR THE LITURGICAL YEAR 1964, I knew I would love it. And I did. So I shared it on social media yesterday, only to be stunned when a friend told me that, on that very day, Brian Doyle had died. Diagnosed with a malignant brain tumor last November, he passed just six months later. He was only sixty.

When diagnosed, this husband and father of three knew what the future held. And in words that capture his spirit, Brian told friends and staff at Portland Magazine (where he was a celebrated writer and editor), “I’ll hear laughter. Be tender to each other. Be more tender than you were yesterday, that’s what I would like. You want to help me? Be tender and laugh.”

There are people I read because they honestly inform me. And then there are people I read because they deeply inspire me. But I read (and will continue to read) Brian Doyle because he genuinely knew me. Showing me the sacramental in the common, the humor amidst the tragic, and the tender within the rough. Brian was the true friend I never met. And today, I cry for his absence and pray for his family and his soul.

I’ll see you over the bar in the river.