Forgiveness, Fear of Growing Up, and the Bonds Between Parents and Children: A Review of “The Hollars” 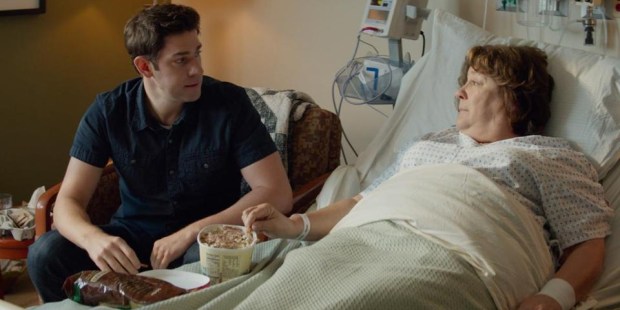 Share
Print
Tony Rossi | Jun 08, 2017
The New York Post recently ran an article about young adults in the city who prefer owning pets to having children. One 29-year-old man quoted in the piece went so far as to say, “Dogs never learn to talk so that makes them more enjoyable company. Overall it’s a more mutually beneficial relationship.”

As loving as dogs can be, I think the young man might be missing some perspective that’s evident even to single people without kids, like myself. It’s a perspective that the Christopher Award-winning film “The Hollars” presents in a funny, dramatic, often tear-filled way.

The story revolves around John Hollar (played by “The Office” star John Krasinski, who also directed the film) returning to his small hometown when his mother Sally (Margo Martindale) is hospitalized with what turns out to be a brain tumor. John’s brother Ron (Sharlto Copley) is having trouble dealing with the fact that his ex-wife has a new boyfriend, while dad Don (Richard Jenkins) is stressed both about the possibility of losing his wife and losing his business.

John himself is suffering an early mid-life crisis in that his career as an artist in New York City hasn’t achieved the success he’d hoped for. He’s also got a girlfriend, Rebecca (Anna Kendrick), who is pregnant and has him fearful of fatherhood and the responsibility of raising a child.

Children and family are at the core of Ron’s stress as well. We discover that he is the one who instigated the divorce from his wife several years ago, and he has become a lonely man who misses being around his children and simply experiencing the comfort and security of family. Ron likely saw marriage and kids as a burden instead of a blessing at the time, but his perspective has profoundly changed at the start of this story.

While the Hollars are definitely dysfunctional and get on each other’s nerves, we eventually come to see that there is a vast reservoir of love underneath the arguments. There’s nothing like the specter of death to make you realize how much your family means to you and how you’ve been taking each other for granted. Little moments of grace are sprinkled throughout the film to subtly make that point.

For instance, there’s a scene late in the movie in which Don is playing with his kids, and it beautifully conveys the joy that this ordinary event brings to his life. And walking through suffering with his mom makes John more aware of the deep bond between parents and children. There is a particularly moving scene when a nurse comes into Sally’s room to shave her head before brain surgery. The look of fear and humiliation on her face is heartbreaking. That’s when John offers to cut her hair off himself, bringing a measure of comfort that this sad-but-necessary act will at least be performed by someone she loves.

Spoiler alert: in the end, John and Rebecca get married because he realizes he’s ready to embark on the adventure of fatherhood with the woman he loves. And all the Hollars come to see that life would be much emptier without the deep and loving bonds they all share. The nurturing of those bonds requires sacrifice, responsibility, and tolerance of our family members’ quirks, but they are at the heart of the most mutually beneficial relationships any of us can experience.

While “The Hollars” includes some foul language, its pro-family message should be welcomed in our world.