“The Star”: Hijinks and holiness make a fun Christmas story for the family 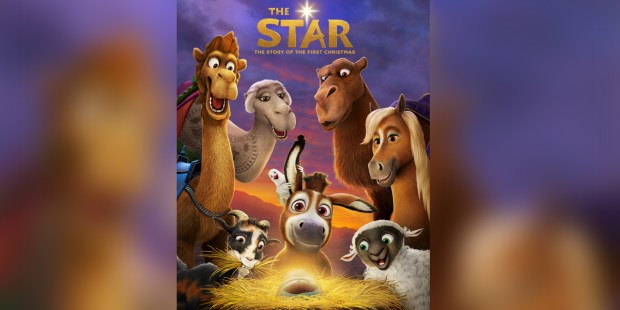 © 2017 CTMG, Inc. All Rights Reserved
Share
Print
Tony Rossi - published on 11/14/17
Those of us of a certain age may remember the Christmas story being told from the point of view of a clay-animated long-eared donkey named Nestor who, after being bullied all his life, found accomplishment and purpose by carrying Mary to Bethlehem.

Sony Pictures animated film “The Star” (opening Nov. 17) introduces a different donkey to the genre, one whose comedic antics should win the hearts of kids and parents alike, all while offering a sincere take on the deeper reason for the season.

Bo (Steven Yeun) is a donkey whose life literally involves going in circles. Along with an older companion (Kris Kristofferson), he is tethered to a mill, grinding grain day in and day out. However, Bo dreams of being a part of King Herod’s caravan some day because, to him, it will signify a life of importance. “I’ll be riding with kings any day now,” he insists.

Bo sees a uniquely bright star in the sky and believes it’s a sign that his dream will come to fruition. With help from his fellow donkey and his manic friend, Dave the Dove (Keegan-Michael Key), Bo escapes and winds up in the home of the newly married Mary and Joseph (Gina Rodriguez and Zachary Levi). While Joseph is wary of him, Mary takes to Bo right away, treating him with kindness and compassion.

Though Bo still aims to pursue his dream, he and Dave engage in a different mission when they discover that Mary is in danger from Herod’s henchman and his vicious guard dogs. That eventually leads to a confluence of events in Bethlehem that will change all their lives.

From an entertainment perspective, “The Star” is a winner. I found myself laughing many times throughout the movie thanks to the sharp comedic sensibilities of screenwriter Carlos Kotkin, director Timothy Reckart, and a cavalcade of celebrity voices that are brilliant at delivering clever lines. In addition to the aforementioned characters, special kudos to the three wise men’s camels (Tracy Morgan, Oprah Winfrey, and Tyler Perry), the stable animals (Patricia Heaton, Kelly Clarkson, and Anthony Anderson), and Abby the Mouse (Kristin Chenoweth).

On a human level, Bo’s aspirations make him easily relatable to anyone who has ever wanted to be more than they are. And joined by Dave the Dove and Ruth the Sheep (Aidy Bryant), the missteps of this merry band of misfits on a divine mission will leave kids smiling.

In regard to the religious angle, I thought the film soared to great heights as well. “The Star” is not a word-for-word retelling of Luke’s gospel. Rather, it embodies a contemporary sensibility that is respectful of its source material.

For instance, when the angel Gabriel visits Mary at the beginning of the movie to tell her that she has been chosen by God to bear the Messiah, Mary reacts with more modern language than is in the Bible, but stays true to its spirit. This should make Mary more relatable to modern teens and help them accept the deeper truths expressed in the story. And there’s definite clarity about those deeper truths.

“The Star” doesn’t try to whitewash the nature of what is happening here in order to appeal to a wider audience. The script clearly says the child to be born is “the Son of God.”

More than that, it shows Mary and Joseph struggling with the responsibility of this special child. Yet it is their humility that makes them the perfect pair to do just that. Mary may be humble, but she is not weak. Her strength of character here should make her a good role model for young women who may not have thought much about her in the past.

The final dimension of the movie is one I didn’t expect: action/adventure. Some of that involves the crazy antics of the animals as they engage with the world around them, but there’s another level, too.

A sinister Herod makes it clear that he wants to get rid of this new king he heard about from the Wise Men. He doesn’t overtly say “kill him,” but it’s evident from his henchman’s pursuit of Mary and Joseph that is exactly what he means.

This gives the movie a genuine sense of danger amidst all the comedy. It also makes the storytelling richer and more compelling. The threat of violence never goes too far, so younger kids should still be able to enjoy the film. But I think tweens and teens will find this added level of jeopardy engages them more deeply – and even gives them an accurate portrayal of how devilish a man Herod really was.

Ultimately, “The Star” is a family-friendly Christmas treat that manages to be both funny and faithful, making it something of a modern-day miracle. I hope that its light draws you and your kids to the theater this holiday season.