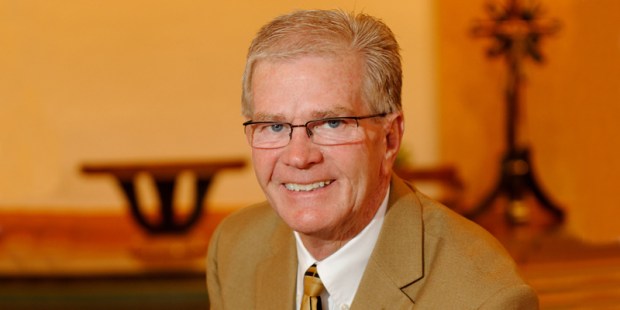 Supplied Photo
Share
Print
Tony Rossi - published on 09/06/17
“You taught me that being Catholic can be fun.”

Veteran catechist and retired TV sportscaster Gary Montgomery nearly fell to the floor when he read that line in a note he once received from an eighth-grade student of his, named Ryan Riggs. Up to that point, Ryan had never said a word to Gary during all their months in class together.

Then, immediately after the students’ Confirmation Mass, Ryan approached Gary and handed him the note.

It continued, “I always looked at being Catholic as being boring, but now it looks fun. It was awesome to have the energy in the room every day. Thanks again for a great experience.”

Gary realized that others might benefit from the approach he brought to his classroom, so he has now put his insights and experiences in a book titled “It’s Fun to Be Catholic!”

During an interview with me on “Christopher Closeup,” Gary recalled that when he started teaching religion to eighth graders, he used the skills he’d honed as a broadcaster in Louisville, Kentucky: specifically, three leadership skills that were also modeled by Jesus:

Gary notes, “Once you start to learn about people, you can contribute to them. When we can contribute to them, we start to make them feel better about who they are. Jesus did it. He was powerful with questions…We have to help [kids and teens] see the value in a relationship with Jesus Christ…I never expected to transform them and have lightning bolts come down in the classroom, but I wanted to be a foundation, so when something happens in their lives where they have to go find Christ, they’ve got an idea of where to go.”

Gary received that foundation as a child by attending Holy Cross Catholic School in Louisville, where the first “class” of the day was always the Mass. He admits to being bored by it at the time, but adds that he knew something important was happening because of everyone’s reverence. That planted the seeds of his awareness that “there’s something bigger than me here.”

As an adult, marriage moved Gary toward a deeper relationship with God: “I realized at a point in my life that I loved my wife more than I loved Jesus. I started to understand that Jesus wants the same thing from me. He wants me to wake up in the morning and, like I did with my wife Judy, tell her about the excitement of the day, what I’ve got planned, and in the evening tell her about all the things that happened. He wants a real live relationship with me. It’s not something just in a book or a catechism…I used to think I was a bad Catholic because I loved my wife more than I loved Jesus. One day, a priest told me, ‘Gary, that’s just the sacrament of matrimony working. God is calling you to understand Him better and to love.’ You don’t have to get this by the time you’re in eighth grade. God just wants you to get it. It’s a process.”

For students, part of that process is learning about Scripture in a fun way. Gary would tell them that the Israelites would take a goat, and the priest and assembly would lay hands on it as a way of getting rid of their sins, then release the goat into the desert. When Gary explains this was the scapegoat, he gets nods of recognition from students familiar with the term, but not its origins.

Gary re-enacts the scapegoat experience with students bringing in stuffed animals, laying hands on them, and throwing them out into the hall. He then gets serious with the kids by asking them, “How good can you be? How good does God want you to be? What holds you back?” Gary never ceases to be amazed by what his eighth graders will reveal in this context that allows them to grow in their spiritual lives.

Gary also takes a listening and learning approach in his interactions with adults, who might challenge him by saying they don’t go to church because it’s boring. Where he used to get confrontational, which didn’t accomplish anything, he now stays calm and asks why they find it boring: “I want to create a conversation with them, a dialogue, where we can discuss what it is. Eventually, I’m going to move them – not in a negative or antagonistic way – but I’m going to ask them what they bring to Mass. We’re going to jump into John’s gospel [and more]…It doesn’t happen overnight, but you start to experience people [making progress].”

Gary’s commitment to asking questions stems from his relationship with his own father, a part of his life he openly shares with his students and with adults at church mission talks: “I wish I’d asked my Dad more questions. My father was brought up in an orphanage, but he didn’t want to talk about it. If I’d worked at it, I could’ve gotten more out of him, and I would’ve learned more about him. My father didn’t do a lot of things with me, but there was a reason. He didn’t know how, and he didn’t know how to love. We could start to experience that love…through a relationship. Relations always start with questions.”

In the end, Gary believes his mission coincides with The Christophers’ philosophy of lighting a candle rather than cursing the darkness. He concludes, “Getting rid of the darkness, the doubt in our lives, is so valuable. The name of [the missions I hold] is ‘Christ is the Light.’ We have a Wednesday morning gathering of men, and our goal is to become men of Christ, to take the light outside the room and share it. It’s a simple process of being the light for someone, listening to someone, sharing Jesus Christ and that love. It is so powerful, so energetic, and it’s so inviting…I wish I had put the light into my father sooner in life. On his deathbed, Dad said, ‘Gary, I wish we’d gone fishing more often.’ I don’t even like fishing, Tony. But he’s saying, ‘I wish we’d have been together more.’ I could’ve pushed that. I could’ve lit that candle and given it to my father. I didn’t do it. I’m trying to do it now.”

(To listen to my full interview with Gary Montgomery, click on the podcast link):