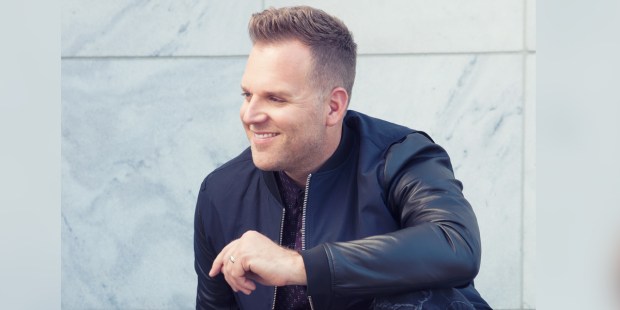 That’s a lyric from singer-songwriter Matthew West’s latest album, “All In,” but it’s also an epiphany the now 40-year-old husband and father experienced over the course of the last year while taking stock of his life, an epiphany that’s impacting how he approaches the future on a personal and spiritual level.

Much of West’s career and music output has focused on him writing and recording songs inspired by the stories he receives from fans via letter and email. He’s collected over 40,000 of those stories from around the country and around the world.

But when someone asked West if there was a story he had not yet told through his songs, he realized he had never shared his own. Since he was writing a book around the same time, West’s mind turned back to his own life, and he found it providing fodder for this new collection of music.

During a “Christopher Closeup” interview, West credited the reflective nature of this album to “what this season of life looks like…My wife and I celebrated 14 years of marriage. We have two daughters that are 11 and 8 years old. Life’s going by pretty quickly, and I think I’ve had this internal aching that says, ‘This is going by too fast. I don’t want to miss what’s happening. How can I make the most of every day that I’m given? How can I make the most of every moment that God gives me?'”

That’s the mindset West brought to the above-quoted song, “The Beautiful Things We Miss.” Its message haunted him, especially as a family man. He said, “It was written from the perspective of me looking into the future and saying, How could my life look if I don’t go all in as a husband and a father? If I’m not being present as a dad for my kids, if I’m more focused on building my career, then what could this look like? This song became a prayer for me, saying, ‘I don’t want to miss the moments in front of me.’ …I had a feeling there’s probably a lot of other dads out there feeling that same way, wondering if we’re going to get to the end of it all and go, ‘Man, I missed it. I was focused on the wrong thing and I missed the beautiful things that were in my life.'”

The concept of going “All In” regarding both family and faith pervades the album, but is dealt with most directly in the title track which conveys a sense of radical surrender to God’s will. West notes that he grew up in church and has been a committed Christian for a long time. So long, in fact, that he was taking God a little bit for granted.

West explained, “What I noticed about myself is that your faith in God can get to a point where it’s just so second nature that it’s not really what the Bible describes as being your first love…In many ways, writing this album was out of a desire of me getting back to my first love and getting back to remembering that moment when I first realized, ‘Man, I want to follow Jesus. I want to live my life for a bigger purpose and have a greater impact in the world.’…I’ve checked a lot of the boxes that make me look the part of a good Christian, but I think sometimes we fall in love with looking the part and maybe forget about living the part. This album is about having those two begin to line up: where not only am I looking the part, but I’m seeking a relationship with God who I know has been chasing after me. He’s gone ‘all in’ for me, and I don’t want to hold anything back from Him anymore.”

For West, not holding anything back means offering God his flaws as well, an issue he deals with on the track “Broken Things”:

The pages of history, they tell me it’s true;
That it’s never the perfect; it’s always the ones with the scars that You use.
It’s the rebels and the prodigals; it’s the humble and the weak;
The misfit heroes You chose
Tell me there’s hope for sinners like me.

West said, “I just assumed that the parts of my life that God would more readily want to use would be the good stuff in my life, my gifts and my abilities, the positive character traits and so on…What I felt like God showed me in the writing of that song in particular was, ‘Matthew, I know about your good stuff. I’m the one who gave it to you. What I’m asking you to trust me with is the most broken parts of your life. The biggest struggles you face. Your weakest moments. I’m asking you to dare to believe that I’m the God who can not only use your good stuff, but I can shine brightest through your broken things, through your broken pieces”, because that’s when we really go all in. Not when we give God part of our hearts, but when we give God every single part of our lives.”

That change in perspective has also led West to think smaller – in a good way. For instance, he knows it’s easy to take those closest to you for granted, so he wrote a song called “Becoming Me” both as a tribute to the job his own mom did in raising him – and also to recognize his wife’s efforts in raising and loving their two daughters. And one of those daughters, Lulu, sings on the track.

It’s just one more reminder of the powerful difference you can make when you pay attention to where God is guiding you. West concludes, “We might be tempted to think of what big things God is calling us to do…Yet, I felt like God kept lowering my sights and showing me that sometimes going all in means turning your attention inside the four walls of your own home…I guarantee you that every single one of us has an area of our lives where God is saying, ‘I have so much more for you. Trust Me and let Me show you how you can go deeper. I’ll show you greater fulfillment than you’ve ever seen.'”

(To listen to my full interview with Matthew West, click on the podcast link):