Catholic Artist of the Month: Timothy Jones and the Art of Gratitude 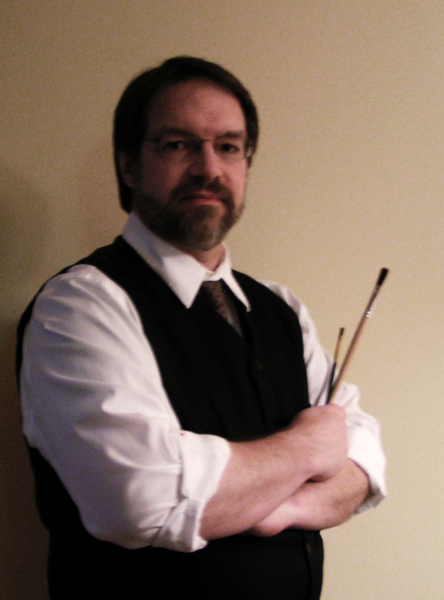 Today begins a new series: Catholic Artist of the Month.  Rather than constantly kvetching about mediocre, sentimental art by Christians, I’ll be featuring artists who are doing it right.

I am delighted to begin with Timothy Jones, an award-winning American realist whose photorealistic oil painting “Tempus Fugit” was just named a finalist in the BoldBrush Painting Competition.  He graciously spent an hour talking to me while he was still in the throes of final exams at Chesterton Academy, the private Catholic high school in Minneapolis where he teaches art.

My questions are in italics. All the paintings featured, and more of Jones’ work, can be found at his online studio and at Fine Art America, where many pieces are for sale.

So, what’s your favorite color?

For the longest time it was blue, but recently I realized it had changed, and now I prefer green — a natural, mossy green. I don’t know what that says about me. I grew up in Alaska, which is very cold, blue, and kind of stark, beautiful in romantic landscape way. But moving to Arkansas as a teenager,  there was just a wall of green. I didn’t really appreciate that at first. It took a while to settle into that. And it was just steaming hot.

How long does it take you to finish a painting?

I don’t keep close track of the hours. It takes from a few days to a week, depending on how thing go and how much time I have. 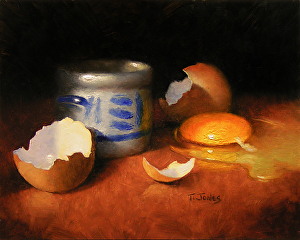 A lot of it is just kind of staring at it. You kind of collect yourself, let things suggest themselves, or just walk away from it for a while, then come back and see what you have.

Do you work on more than one painting at a time?

I should! It would be a good system, because I do work in layers. But I focus on one painting at a time. 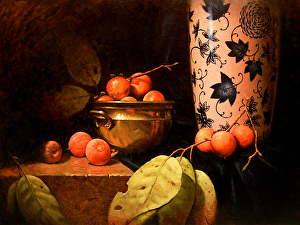 It would be great for my production, to do more than one at a time. Collectors like to see consistency. They like to group things thematically. But I always feel like I’m just learning to paint, because I’m trying out different things.

The last couple of paintings have been done in a style that’s been around for a few decades, called hyperrealism.  I’m not sure how I feel about it, but I wanted to try. There are certain aspects of it that appeal to me — strong shadows; detailed, meticulous work. 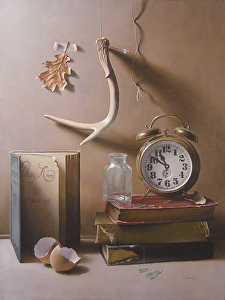 In a lot of circles, what’s popular now is impressionism. You do more with color, you appeal to the emotions, use expressive brushwork. I love that. 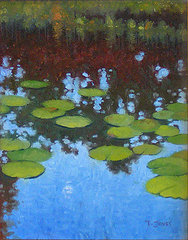 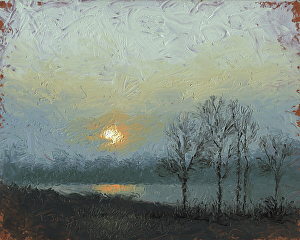 Hyperrealism — is that the raspberries 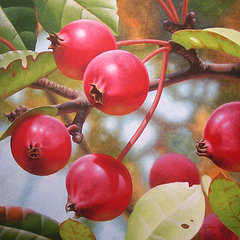 Those take more of a macro view, with a more contemporary composition I was trying out. The response has been terrific.

But it seems like a classic composition is what you keep coming back to — the straight-on view, a glass, a piece of bread, a piece of fruit . . . 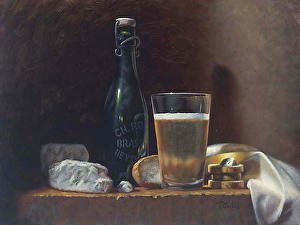 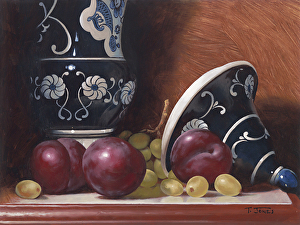 I feel like I’ve been learning to paint all this time. By using this traditional structure, I can work with and can try things inside that, and feel like I have some confidence and change one thing.  For instance, I was in the habit of using a dark background, 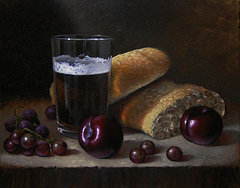 and it was a little leap to use a lighter background. 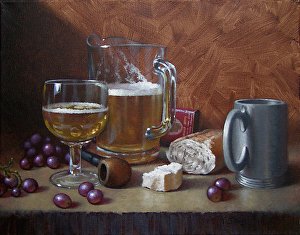 Beer has this beautiful color, but you can’t see it well with a dark background.  I paint a lot of beer! 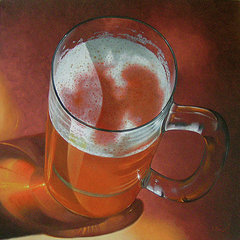 It’s been good to work out some how I deal with light, things like these last couple I’ve done, like some eggshells. 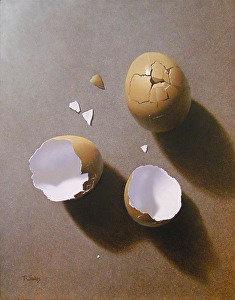 Another was “Tempus Fugit,” [see above] which is made up of a lot of things that remind me of the passage of time. I didn’t set that up intentionally; there was some stuff in a box, and I decided to paint it, and it turned out they were all themed.

One painting that my sons loved was the hamburger. You’ve done a few hamburgers. 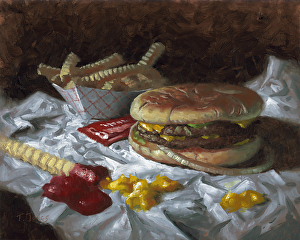 I was happy with it. It ended up in a show. Everyone thought it was great, but then it stayed around forever. Nobody bought it.

Is there a struggle between wanting to paint something and having to make a commercial decision?

I did some orange paintings that sold while they were still wet. 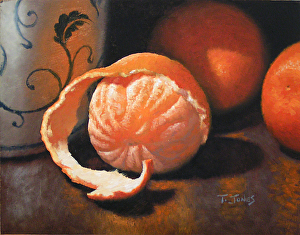 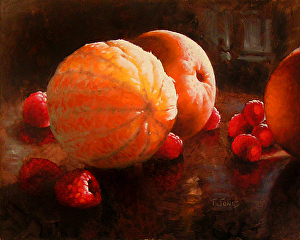 The gallery guy said, “Go home and paint about twelve more oranges.” But this weird little thing in my brain says, “I can’t paint an orange now, because it’s been requested! I’m switching now to submarines!

But I have a genuine interest in everything I paint. You spend a lot of time lying in bed thinking about what you want to paint next. I haven’t always had a really clear idea of what direction I want to go in, but I have had a clear idea of what I don’t or shouldn’t want to do.

There’s the temptation of doing something that’s going to sell well: kitschy, sentimental stuff, might have worked out.  My family might have wanted me to do some of that!  But I always really had to paint things that I was interested in. I find beer really beautiful. A lot of the setups are trying to create an atmosphere of fellowship or camaraderie. 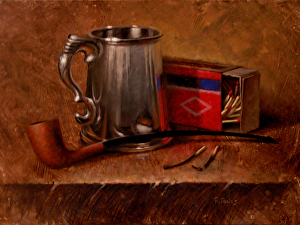 Speaking of an atmosphere of fellowship, you teach classical art in a private high school, Chesterton Academy. How did that come about?

I went to a Chesterton conference with a painting and a drawing of Chesterton, 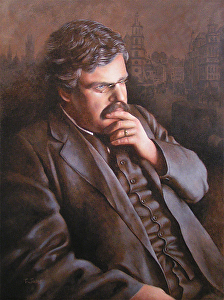 Astonished at the World

and the head of the Chesterton Society came up and said, “We’ve started a school.  Would you like to move to Minnesota?”  Now I’m finishing my second year there.  If there’s one thing that could drag me away from painting, it’s that.

The school is in its fifth year. They started with eight or nine students, and now they have 115. The school has this character of a little, crazy school – a private, Catholic classical high school – and the spirit of Chesterton plays a big part in that. It’s a joyous, thankful approach to Catholicism, a very human Catholicism.  We have the greatest conversations in the faculty lounge. The kids all take drama, and they all take four years of art – studio art, and art history.  It’s kind of a luxury for me to delve into those books again.

A lot of the kids are surprised to learn that there are steps to making a work of art. They think you just come out of the womb with this talent, that you pick up a pencil and it’s magic. There is an element of that, but there are also a whole lot of ways to systematically help yourself. The kids open up in a way that is gratifying, and fun, to see. They surprise themselves.

After I teach them, they can go on and paint like Picasso if they want to. I try to keep things positive and not bash that kind of art. But I want them to be aware of all this beautiful stuff.

Last year, the juniors and seniors took a field trip to Rome. (I couldn’t afford to go; moving had done such wonderful things to my budget!).  You don’t have to convince them that Caravaggio or St. Peter’s Basilica is great. It changes a person.  Compare that to the absurdity of some modern art movement . . . it’s not anything you really have to spell out.

And you have been through some spiritual changes yourself, as a convert to Catholicism?

It’s all Jimmy Akin’s doing. He and I were friends in college. In our thirties, my wife Martha and I lived close to him and his wife. It was a great time. He has one of the quickest minds I’ve ever seen.  I can’t keep up with him, but it was fun to try. Also, he’s just an honest person.  Wherever the logic takes him, he’ll go. He began to help me start learning to think. One thing led to another and here we are.

What sort of art have you been looking at recently?

I just saw a bunch of painting from ancient Rome, nature studies on their walls. Still life. They were just doing the same thing:  “Isn’t this great, we have these fish!” I think that’s part of Chesterton’s writings: this love and gratitude for the material world, a reaction against the puritan suspicion of the physical world, or the gnostic suspicion.

What do you mean, “gnostic suspicion?”

I see currents of gnosticism in modern art. Suspicious, antagonistic to dull reality, to life, to the rocks in the street. We don’t wanna paint things that are all around us, we have to transcend that! But for me, the transcendence comes through the experience of things. Explore this, talk about it . . . that’s what I love about art. That’s what art, especially original art, not reproductions, is: this tremendous dialogue. Someone painted this a thousand ago, and I’m reading his  mind. I like this idea of this dialogue, fellowship over a bird or a plant.

Your art strikes me as very Catholic, even the ones that aren’t explicitly religious, like “Immaculate Heart” is. 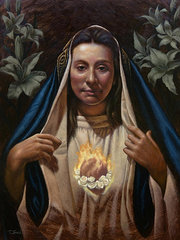 I’m glad to hear that! I try to think sincerely what I should be painting. What can I do to move people toward the truth? I try to think of things I can show my own gratitude for. The essence of art is the artist saying,  “Look, I have something to show you. I saw this plant, I saw this bird!”

Are you a Catholic artist, or do you know one who would be available for interview? Send me a tip at simchafisher[at]gmail[dot]com.