Crappy solemnity to you; or, Maculate. All too maculate.

Black eye: Despite being Facebook friends with All The Catholics, I somehow didn’t realize today was a Holy Day of Obligation until about 10 a.m.

Feather in my cap: We figured out a way to get everyone to Mass without too much suffering: Damien would go into work late and bring the older girls, who had a day off for some reason, to noon Mass. Then, in the evening, they would stay home with the youngest kids while I took the middle kids to Mass, while Damien worked late. Not ideal, but not too horrible; and the three-year-old, who thinks she is Elsa and so will not wear a jacket at night in December in New Hampshire, will not be required to leave the house at all. This is why I get a little testy with the “Holy Day of Opportunity!” stuff. People who say that don’t have a kid who thinks she is Elsa.

Another feather in my cap: I got all my stuff done, even went on the treadmill and took a shower, even made the bed, and even remembered to defrost four balls of pizza dough.

Yet another feather in my cap: Since I was so ahead of the game, I thought I’d stop on the way home from school and go ahead and buy the food for the giving tree, while giving the kids an impromptu lesson on love in action.

Black eye: Going off routine meant that I accidentally went home minus two kids, who were waiting at the library.

Feather in my cap: They don’t know I forgot them. They think I was just sort of vaguely running late. Dropped off the other kids with instructions to grease and flour four pans and preheat the oven, and zipped back over to the library to get the little neglecterinos.  Got home, made four pizzas, thrust them into the oven.

Black eye: Made one kid cry over long division. Same kid that I had yelled at, on the way home, for breaking his back back zipper. Well, he was overstuffing it!

Feather in my cap: At least we don’t home school anymore.

Yet another feather in my cap: Ate supper, got everyone cleaning up and making tomorrow’s lunches, and even sat them all down to read an informative article about the Immaculate Conception to them, before it was time to go.

Black eye: Suddenly remembered to take the last pizza out of the oven: 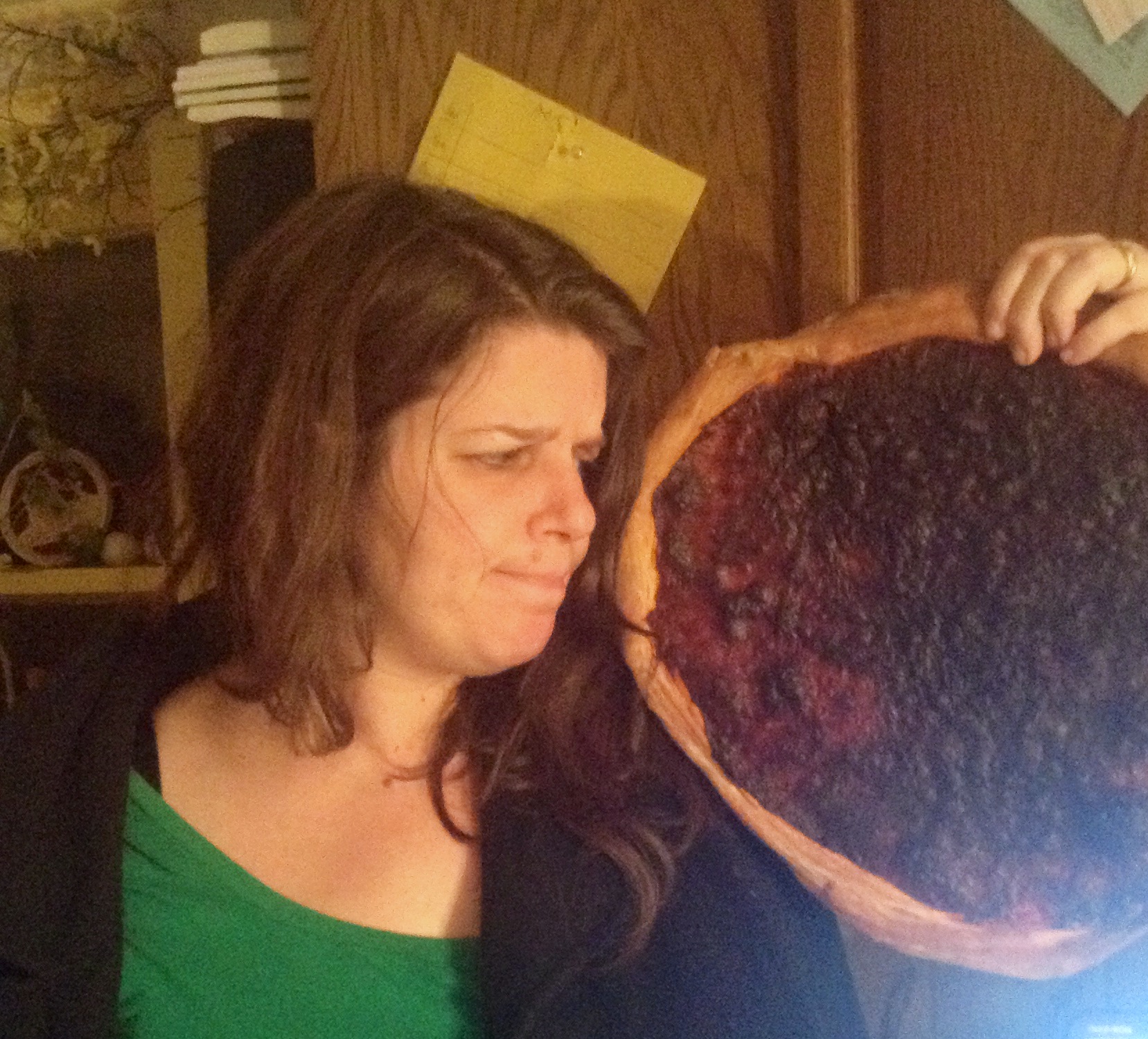 Black eye: Tossed everyone into the car, shrieked instructions for the older kids to put Elsa in bed before we get back, and got to the church with about thirty seconds to spare. Discovered that the windows were all dark. No bueno. Must be at the other church on the other side of town! Go go go!

Yet another black eye: Nope, that church is even darker and more deserted.

Yet another black eye: On the way back to the first church, where Mass must surely be after all, engaged in conversation about whether or not it is illegal to own a pet monkey, and allowed one kid to tell another kid a story about how this one chimpanzee ate his owner’s face off.

Yet another black eye: Threatened to kill one kid as we rushed through the icy parking lot in the dark on the way to the church. Not the same kid I yelled at before! A different kid. Went inside and discovered that this church was, you guessed it, dark and deserted.

Feather in my cap: Sang both verses we could remember of “Immaculate Mary” on the way home. Will look up, “Hey, we tried” in Latin. Let the children pretend to be pet monkeys. Did not let them eat the black pizza.

And now it’s time for bed. Definitely, a feather in my cap.