Poetry-ize your house for the summer 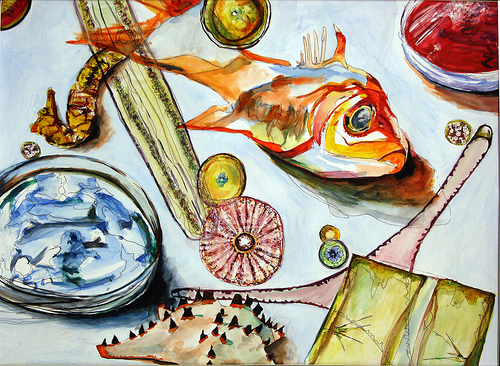 Behold my triumph in a stealth supplemental classical education!  My nine-year-old son, the one affectionately known as “Rat Boy,” came up to me and said, “I really liked that thing you put up, the one about the cows and everything.”  He meant the great G. M. Hopkins poem “Pied Beauty,” which I had printed out, matted on construction paper, and tacked over his gerbil’s tank without comment.

He and his siblings certainly did not want to memorize poems when we were homeschooling!  Boy, did they not want to.   But I’ll be darned if I didn’t  hear my seven-year-old (also known as “Rat Boy.”  What can I say?  They act ratty) muttering, “What the hammer?  What the chain?  In what furnace was thy brain?”  Yes, folks, my boys are reading poetry, and they are enjoying it.

As I’ve mentioned, it’s good to be a decent writer no matter what your profession or vocation; and the best writing comes from people who read a lot, and who have certain ponderous, glorious, melodious phrases steeping in their brains.  It’s good to own these phrases whether we’re consciously thinking of them or not — whether we understand what they mean or not.  So I’m on a poetry rampage these days . . . but a stealthy one.  No nagging, no prodding, no pedantics or pleading.

I just sat down and skimmed through lists of famous poems, picking out my favorites, and printed them out in a large, plain font (it takes forever to write poems out by hand, for some reason).  Then I cut each page down to the size and shape of the poem, rather than leaving them on 8.5×11 paper — I think they look more appealing, less easy to ignore as educational-type stuff, if they’re nonstandard shapes.  Then I matted them on whatever color paper seemed appropriate (again, to make them more decorative and appealing, and less scholarly in appearance), and went around the house tacking them to walls.

I tried to make the placement relevant (“Love (III)” goes under Rublev’s icon of the Trinity; “Dust of Snow” goes next to the window on the side of the house where there are, in fact, crows and trees), but went first for places where I’ve noticed that people tend to hang around staring at the walls already.  Then I didn’t say a word about them, and just waited for the kids to notice.  I think the key was not making a big deal about it — just doing it because I felt like doing it.  No pressure, so they had no motivation to rebel or be difficult.

Here are the poems I hung up, chosen mostly because they’re fairly short and have wonderful sounds and/or images:

and here are the ones awaiting colorful matting as soon as I remember where I left the construction paper:

“Thirteen Ways of Looking At a  Blackbird” Wallace Stevens
“When I Was One-and-Twenty” (from A Shropshire Lad) A. E. Housman
“Epistemology” Richard Wilbur
“The Lake Isle of Innisfree” William Butler Yeats
“The Force That Through the Green Fuse Drives the Flower” Dylan Thomas
“maggie and milly and molly and may” e. e. cummings
“The Walrus and the Carpenter” Lewis Carroll
“Nothing Gold Can Stay” Robert Frost
“Mock On,  Mock On, Voltaire, Rousseau” William Blake
“At the Sea-Side” Robert Lewis Stevenson
“Marginalia” Richard Wilbur
“I Knew a Woman” Theodore Roethke

I wanted to put “She Dwelt Among the Untrodden Ways,” but we have a Lucy, whom we do not want to creep out.  Otherwise, I gave my self full permission to just pick stuff that I happen to like for whatever reason, and didn’t feel obligated to choose Important Works Students Ought To Learn.

Oh, it’s so easy!  I’m very happy about this idea, and I don’t see how it could possibly do any harm.  When we stopped homeschooling, I was very glad to have someone else take over all the work, but felt persistently of blue that the curriculum was a little flat.  Now I feel like I’ve snuck vitamins into all their favorite snacks, and their days are bound to be richer.

Lots of people hang up quotes from saints or favorite authors, and I think this is a great idea, too.  But for now, I’m just pushing sounds and images.  Do you do this at your house?  What’s on your walls?