My favorite part of How the Grinch Stole Christmas is where he brings back the roast beast. Because while it’s true that Christmas isn’t about presents or decorations or food, you really do want to have that special Christmas food!

PIC the grinch himself carved the roast beast

If we can manage it, we spend Christmas Eve drinking egg nog and decorating the tree, then going to Midnight Mass.  Then Christmas morning is presents and chocolate and a breakfast of eggs, bacon, fresh fruit, and cinnamon buns.  Candy all day.  Then — and here is the most brilliant idea we’ve ever had — Chinese take-out for dinner.  I think this tradition was instituted on the Christmas that I was 8 and 24/30ths months pregnant with baby #6, and was not up to cooking a ham or turkey that nobody wanted anyway.  But somehow, no matter how stuffed with marshmallow Santas you are, there is always room for meat on a stick.

For the rest of Christmas food (which we make during vacation, which means they may not appear until after Christmas day) here are my tried and true recipes, suitable for anyone who can follow directions, but isn’t especially gifted in the kitchen:

Skaarup’s Lunatic Fudge Lots of variations.  The kids like the one with crushed candy canes.  You don’t need a candy thermometer to make this stuff, and can turn out pounds and pounds of it pretty easily.

Buckeyes. These are delicious, and easy enough for the kids to make mostly on their own.  I just go in the other room and pretend I don’t know what horrors are transpiring. 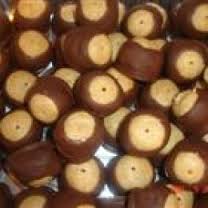 NB:  I do not recommend adding a dab of chocolate to cover up the toothpick hole, unless you are prepared for candy that doubles as a female anatomy lesson.  Ha-cha-cha!

Peanut brittle.  I always hated peanut brittle, so I don’t even know why I tried this recipe. But it is fantastic.  Very light and airy, nothing like the tooth-loosening stuff you get at the store.  Oh, and the part where you add the baking powder and it foams up like crazy?  FUN.  You can also make it with other kinds of nuts.

I don’t usually make cookies, because they just seem to flow into the house on their own.  Also, I made terrible cookies.

How about you?  What are your essential Christmas foods?

Prayer for this evening
Top 10
1
Bret Thoman, OFS
What Padre Pio saw in the Spanish Flu of 1918
2
Philip Kosloski
5 Fascinating facts about Jesus in the Eucharist
3
Philip Kosloski
5 Essential things used at Mass and their symbolism
4
Philip Kosloski
Padre Pio’s favorite prayer of petition
5
Cerith Gardiner
7 Joys to be had from a lengthy marriage
6
Brett Salkeld
How to vaccinate like a Catholic
7
Cerith Gardiner
The lasting lesson from the late Prince Philip
See More