What if a donkey became your spiritual guide? 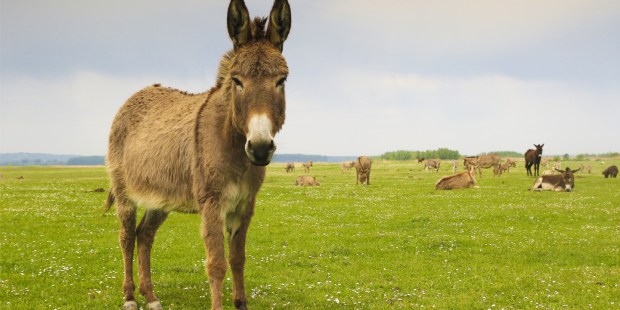 This humble animal has played a big role in some of history’s holiest events.

The donkey has journeyed by man’s side through seven millennia of history. While its distant cousin, the horse, carried men to war, the donkey helped to till the fields. God commanded that man might work for six days but must rest on the seventh. But we often forget the end of the verse: “On the seventh day you shall rest … that your ox and your donkey may have rest” (see Ex 23: 12). The donkey is one of the most often cited animals in the Bible. A symbol of humility, it was the Christ child’s mount in the flight to Egypt. And it was on a donkey’s back that Jesus entered Jerusalem in triumph the week before his Passion.

That the donkey stood next to the ox around the Nativity crèche is unauthenticated in the canonical Gospels, but its presence is well attested in the apocrypha. It’s only logical that the donkey that accompanied the Holy Family from Nazareth to Bethlehem should also have been present at the Nativity of the Lord.

The preferred companion of saints and monks

While excesses led the Church to abolish the practice at the end of the 17th century, the donkey held the starring role at the medieval “Donkey’s Mass” on the eve of Advent.

The donkey was also the preferred companion and mount of saints and monks, most notably Sts. Nicholas and Martin. And, in 1195, Pope Innocent III instructed the monks of the Order of Matthurins to travel by donkey — ever the symbol of humility — as other forms of transport laid them open to charges of the sin of pride.

But this biblical and religious fondness for the donkey doesn’t seem to have translated into popular practice. If we’re to believe common adages, this animal is nothing but an amalgam of faults. It’s treacherous, since you have to be wary of the well-known “mule kick.” It’s stupid — indeed, the dunce cap was once known in Europe as “donkey ears.” And, above all, it’s incredibly stubborn.

A stubborn animal? No, just prudent

But nothing could be less true, according to donkey lovers. “It’s an animal that’s been both reviled and celebrated,” explains Jacky, a donkey breeder. “If it has big ears, it’s because, unlike most people, it has heightened good sense.” An obstinate animal? No, just cautious. “You only have to carefully observe the animal’s behavior to get it,” Jacky explains. Well-considered, when faced with obstacles, the donkey looks before it leaps. “There’s no use giving it whacks of the stick. It needs reassurance to move forward.”

But that doesn’t mean it’s a timid animal. Despite its gentle nature, it’s more than capable of defending a flock. “The donkey has a pronounced gregarious instinct,” says Jacky. “When it accompanies a flock across the mountains, it greatly reassures the sheep. It will ward off the attack of predators simply by braying.”

At the same time, it’s capable of the greatest gentleness with children and is happy to have its ears pulled without the slightest objection. And, whether playing on the heartstrings or playing the fool, it’s capable of warming the soul of adults, too. How much we could all learn from this animal!