Friday, July 3
Saint of the Day: The Feast of Saint Thomas

“Doubt no longer, but believe” 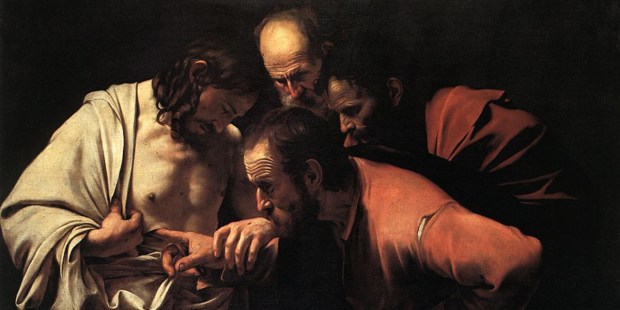 + All that we know for certain about Thomas comes from the New Testament. He is mentioned as one of the Twelve Apostles in all four gospels and his nicknamed Didymus, “the twin,” in John’s Gospel.

+ It was “doubting” Thomas who refused to believe that Jesus had risen from the dead until he had seen him with his own eyes and put his finger into his wounds; this prompted Jesus’ response, “Doubt no longer, but believe,” to which Thomas replied, “My Lord and my God.”

+ According to tradition, Thomas preached the Gospel in Persia and India, where he was martyred.

+ Saint Thomas is honored as the patron of architects and builders. He is also a patron saint of India, Indonensia, Malayska, Pakistan, Singapore, and Sri Lanka.

+ A community of Syriac Christians in Kerala, India, trace their origins to the preaching of Saint Thomas. They are commonly known as “St. Thomas Christians.”

“The disbelief of Thomas has done more for our faith than the faith of the other disciples. As he touches Christ and is won over to belief, every doubt is cast aside and our faith is strengthened. So the disciple who doubted, then felt Christ’s wounds, becomes a witness to the reality of the resurrection.”—Saint Gregory the Great

Grant, almighty God,
that we may glory in the Feast of the blessed Apostle Thomas,
so that we may always be sustained by his intercession
and, believing, may have life
in the name of Jesus Christ your Son,
whom Thomas acknowledged as the Lord.
Who lives and reigns with you in the unity of the Holy Spirit,
one God, for ever and ever. Amen.