Friday, September 11
Saint of the Day: Sts Protus and Hyacinth 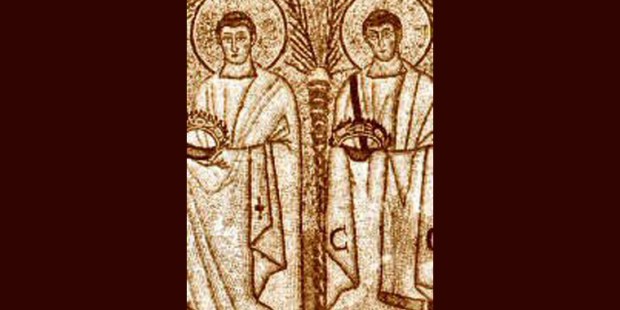 + According to ancient tradition, Protus and Hyacinth were brothers who were servants of Saint Eugenia, a wealthy Roman woman.

+ After their baptism, they devoted themselves to the study of Sacred Scripture and lived as hermits for a time in Egypt, but later returned to Rome.

+ Sometime between 257 and 259, they were arrested—along with Saint Eugenia—because of their Christian faith during a persecution of the Emperor Gallienus.

+ Although they were given the chance to deny Christ, the brothers refused and were beaten and beheaded on September 11.

+ In 1845, the grave of Saints Protus and Hyacinth was discovered in the Catacomb of Saint Hermes on the Via Salaria.

“If anyone would come after me, let him deny himself, take up his cross, and follow me.”—Matthew 16:24

May the confession of Thy blessed martyrs, Protus and Hyacinth, comfort us, O Lord, and their kind intercession constantly protect us. Through Our Lord Jesus Christ: Who liveth and reigneth with Thee in the unity of the Holy Ghost, one God, for ever and ever. Amen.